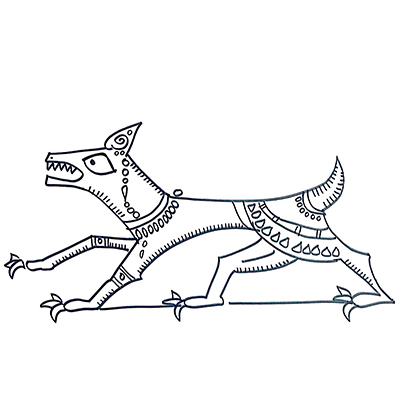 The word ‘bitch’ has a very sharp biting negative connotation in common parlance. It refers to a woman of loose morals, a treacherous woman, a manipulative woman. However, increasingly the word has been re-appropriated by women and is being seen as a word of power, with women addressing each other as ‘bitches’, as part of a global feminist sisterhood, refusing to be domesticated, determined to ‘bark’ back at injustice and oppression.

She appears in all her splendour in the earliest Vedic text, the Rig Veda, serving Indra, the mighty warrior-god of the Aryans. Indra sends Sarama out to locate his cows, which were stolen by people known as the Panis. In some stories, she returns saying she could not find them, having succumbed to the bribe of curds offered by the Panis. Indra sees the froth of curds around her jaw and kicks her for betraying him. In other stories, not only does she find the cows, hidden in the cave of the Panis, but also negotiates their recovery, earning the love and affection of Indra.

In later texts, her children, the Sarameyas, are considered the four-eyed guardians of the Land of the Dead, separated from the Land of the Living by the river Vaitarni. They are the companions of Yama. In the Mahabharata, Sarama and her children visit a sacrificial site where king Janmajaya is performing a sacrifice to kill all the nagas. The dogs are accused of licking the pot of milk being used to prepare offerings to the gods. Stones are thrown at them by the king’s brothers and so, Sarama curses that the yagya will not prove successful, which is exactly what happens.

Dogs, in general, are associated with the aggressive form of Shiva known as Bhairava. This form of Shiva is kept outside the village and is associated with crematoriums. Bhairava is also called the guardian or kotwal of Kashi, who wanders the perimeters of the city with his dogs. These dogs of Bhairava may be associated with Sarama’s children, the Sarameya. The great teacher of teachers, Adinath Dattatreya, in art, is shown associated with four dogs, who are considered the embodiments of the Vedas. Since Saraswati is the mother of the Vedas, some people argue that Sarama also represents the goddess Saraswati.

Dog lovers, of course, associate dogs with unconditional love but, in Hindu mythology, they are associated with death, attachment, clinginess and neediness. The dog was clearly a sacred animal for ancient Aryan communities. Therefore, the dog plays a very important role in the death rituals of the Iranian Parsi community, owing to their Aryan roots. However, in orthodox Brahmin communities, it was associated with death, hence, inauspiciousness. Sarama is not allowed into Indra’s paradise but Yudhishthira insists that she enters with him, for she has been a loyal companion through his entire journey.