When Somnath Temple Was Being Raided, Chola kings Were Reaching Vietnam 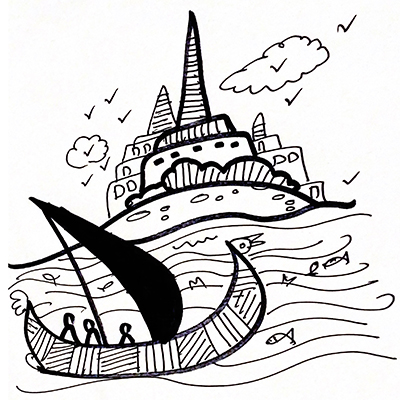 As per Brahmin lore, all civilisation in Tamil lands emerged in a mystical past after Agastya brought grammar from the Himalayan regions, along with mountains and rivers which became known as Southern Kailasa and Southern Ganga. But these are clearly later tales, composed less than thousand years ago, seeking to obscure the contribution of earlier Buddhists and Jain monks, and the even earlier Dravidian drum-beating poets, patronised by warrior chieftains, who venerated gods of the mountains, pastures, farms, drylands and seashores, and merchants who travelled by sea to faraway golden islands of Southeast Asia, the Survanabhumi, to trade Indian textiles.

The oldest Tamil poems that we have are around 2000 years old. And they speak of five landscapes and connect each one with an emotion and a god.

Some argue that the sea-god is Varuna and the rain-god is Indra, that Ceyon is Kartikeya, or Shiva, and Mayon is Krishna and Kotravai is Kali. But these seem like forced comparisons. When Vedic civilisation was emerging in Gangetic plains around 1000 BCE, South was full of who were smelting iron; and farmers who were burying the dead in large pots, and marking the spot with dolmens made with giant rocks; and pastoral people with herds of sheep and goat were burning dung heaps to create large ash mounds, across the Deccan. These people were clueless about Indra, Agni and Soma. By 300 BCE, the Mauryan empire extended along highways that extended from the north of India down south, but only upto Tungabhadra, not beyond. We know very little of what was happening further south at this time except perhaps what we learn from early Sangam songs. It is in Ashokan edicts we learn of the kings known as Cheras, Pandyas and Cholas. In later literature, this region is known as Tamilakkam.

Early Sangam works indicate some familiarity with the northern people, who are referred to as the Aryas. For example, when one poet sees the three kings, the Cheras, the Cholas and Pandya king sitting together talking, rather than fighting as they usually did, he equates them with the three fires of the Vedic Brahmin priests indicating familiarity with the fires meant to make oblations to the gods, to the ancestors and to the household found in Vedic traditions. There is one reference indicating familiarity with the Ramayana. Poet refers to monkeys picking up the jewellery dropped by Sita when she has been abducted by Ravana and taking it to the king. But they do not refer to the South as the land of the vanara (monkey), as it came to be known in the Vijayanagara period, seven hundred years ago. There is also one reference to the Mahabharata where we hear of a Chera king who provides food for the soldiers who fought at Kurukshetra.

By 1000 CE, the same countryside was filled with songs of the Alvars and Nayanars who are passionately devoted to Vishnu and Shiva. Tamil versions of Ramayana and Mahabharata are composed. Between the composition of Sangam poetry and the composition of devotional Hindu works, Tamil epics were composed. In Silappadikaram, Manimegalai, Kundala Keshi and Jivaka Cintamani, women play a prominent role, and Buddhist and Jain philosophy is prominence. Some would call this period a dark period of Kalabharas. But this was actually a time when Hindu as well as Buddhist merchants and priests were travelling from Tamil coasts to faraway Vietnam and Cambodia and Indonesia spreading Indian ideas of kingship.

By 500 CE, merchants had taken images and stories of Brahma, Vishnu and Shiva, as well as Buddha. Sanskrit was spoken by the elite members of the court, which lead to spread of Hindu ideas of kingship such as Chakravarti embodied in the epic Ramayana. Some of the earliest Ramayana artworks on a temple wall are found in Central Java (Prambanan), about the same time that we find them in cave temples carved by Chalukyas in Karnataka. This is around 1200 years ago, when Pallava kings had marital relationships with the rulers of Funan. Kaundinya, a merchant-prince or sage, had married the Naga princess there, as per legend.

In the 10th Century, the Chola kings had waged a naval war against the Srivijaya kings of Sumatra and Java. This connection between the Chola Mandala (Coromandel coast) and Suvarnabhumi (Southeast Asia) is eclipsed by all talk of Muslim invaders from Central Asia. Around the time Somnath temple was being raided by the Ghaznavids, Cholas were taking their merchant ships to claim naval passage across Malacca straits to the faraway Champa kingdom in South Vietnam. While Dharma-shastra was forbidding North Indians from sea travel, Tamil merchants were establishing strong sea trade routes to China.

However, by the time temple-cities such as Angkor Wat and Ayuthia in Cambodia and Thailand emerged seven-eight centuries ago, Brahmins were increasingly shunning sea travels, which explains the waning influence of Hinduism and rising influence of Buddhism. This relationship waned even further as the orthodox Brahmin rules of not crossing the sea also took root in Tamil lands. After the 14th Century sea trade had passed on to Arabs, and by the 16th Century was being grabbed by Europeans.

A large number of land grants in Tamil Nadu started being made to Brahmins either directly or via temples, which prevented brain drain to Southeast Asia, and also led to the rise of agricultural feudalism and caste practices. Buddhist who did not find local Indian patronage found success in Burma and Thailand. In the centuries that followed, when Muslim Sultans controleld much of North India, Tamil history reveals rivalry emerges between Brahmin priests who favoured Shiva and those who worshipped Vishnu, and village gods such as Aiyanar and Sastha who were seen as being born of Shiva (Hara) and Vishnu (Hari). We also find the rise of right-handed castes who controlled land and left-handed castes who controlled crafts.

Memory of Tamil connections with Suvarnabhumi was restricted to folklore. No Purana talks about these great sea voyages. There are no grand royal carvings of the same either in India. The connection with the warlords of North India seems to have squeezed out all Tamil memories of merchants who long traded with islands of Southeast Asia.