This was Ravan too 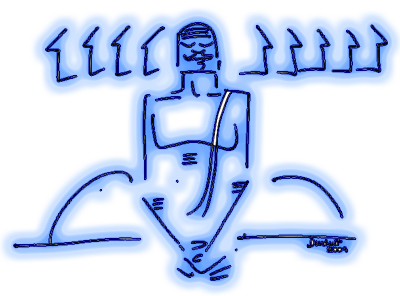 First published in Asian Age and Deccan Chroncile, on 27 Sept 2009 as ‘The Wisdom of Ravan’.

Ravan abducted Ram’s wife, a crime for which he was killed by Ram himself. So says the Ramayan. The epic makes Ravan the archetypical villain. And since Ram is God for most Hindus, Ravan’s actions make him the Devil incarnate. This justifies the annual burning of his effigy on the Gangetic plains during the festival of Dassera.

But on the hills of Rishikesh or in the temple of Rameshwaram, one hears the tale of how Ram atoned for the sin of killing Ravan. Why should God atone for killing a villain? One realizes that, like most things Hindu, the Ramayan is not as simplistic and pedestrian an epic as some are eager to believe.

Ravan was a Brahmin, the son of Rishi Vaishrava, grandson of Pulatsya. Ram, though God incarnate, was born in a family of Kshatriyas. In the caste hierarchy, Ram was of lower rank. As a Brahmin, Ravan was custodian of Brahma-gyan (the knowledge of God). Killing him meant Brahma-hatya-paap, the sin of Brahminicide, that Ram had to wash away through penance and prayer. Another reason why this atonement was important was because Ravan was Ram’s guru.

The story goes that after firing the fatal arrow on the battlefield of Lanka, Ram told his brother, Lakshman, “Go to Ravan quickly before he dies and request him to share whatever knowledge he can. A brute he may be, but he is also a great scholar.”The obedient Lakshman rushed across the battlefield to Ravan’s side and whispered in his ears, “Demon-king, do not let your knowledge die with you. Share it with us and wash away your sins.”Ravan responded by simply turning away. An angry Lakshman went back to Ram, “He is as arrogant as he always was, too proud to share anything.” Ram comforted his brother and asked him softly, “Where did you stand while asking Ravan for knowledge?” “Next to his head so that I hear what he had to say clearly.” Ram smiled, placed his bow on the ground and walked to where Ravan lay. Lakshman watched in astonishment as his divine brother knelt at Ravan’s feet. With palms joined, with extreme humility, Ram said, “Lord of Lanka, you abducted my wife, a terrible crime for which I have been forced to punish you. Now, you are no more my enemy. I bow to you and request you to share your wisdom with me. Please do that for if you die without doing so, all your wisdom will be lost forever to the world.” To Lakshman’s surprise, Ravan opened his eyes and raised his arms to salute Ram, “If only I had more time as your teacher than as your enemy. Standing at my feet as a student should, unlike your rude younger brother, you are a worthy recipient of my knowledge. I have very little time so I cannot share much but let me tell you one important lesson I have learnt in my life. Things that are bad for you seduce you easily; you run towards them impatiently. But things that are actually good for you, fail to attract you; you shun them creatively, finding powerful excuses to justify your procrastination. That is why I was impatient to abduct Sita but avoided meeting you. This is the wisdom of my life, Ram. My last words. I give it to you.” With these words, Ravan died.

With ten heads, twenty arms, a flying chariot and a city of gold, the mighty Ravan is without doubt a flamboyant villain. His sexual prowess was legendary.When Hanuman entered Lanka, in search of Sita, he found the demon-lord lying in bed surrounded by a bevy of beauties, women who had willingly abandoned their husbands. Ram, by comparison, seems boring — a rule-upholder who never does anything spontaneous or dramatic. He is the obedient son, always doing the right thing, never displaying a roving eye or a winsome smile. It is not difficult therefore to be a fan of Ravan, to be seduced by his power, to be enchanted by his glamour, and to find arguments that justify his actions.

One can’t help but wonder: why does the poet, Valmiki, go out of his way to make his villain so admirable, so seductive, so enchanting?

Valmiki describes Ravan as the greatest devotee of Shiva. In many folk versions of the epic such as Ram-kathas and Ram-kiritis, we are informed that Ravan composed the Rudra Stotra in praise of Shiva, the ascetic-god. He designed the lute known as Rudra-Vina using one of his ten heads as the lute’s gourd, one of his arms as the beam and his nerves as the strings. The image of Ravan carrying Mount Kailas, with Shiva’s family on top, is an integral part of Shiva temple art.

Perhaps, say some scholars, that this expresses the legendary battle between Shiva-worshippers and Vishnu-worshippers. Ram, who is Vishnu on earth, kills Ravan who is Shiva’s devotee. But this argument falls flat when one is also told that Ram’s trusted ally, Hanuman, is a form of Shiva himself. Valmiki is clearly conveying a more profound idea by calling Ravan a devotee of Shiva . And to understand the thought we have to dig a bit deeper.

Shiva is God embodying the principle of vairagya, absolute detachment. He demonstrates his disdain for all things material by smearing his body with ash and living in crematoriums. The material world does not matter to him. Ravan may be his great devotee; he may sing Shiva’s praise, and worship Shiva every day, but he does not follow the path of Shiva.

In reality, Ravan stands for everything that Shiva rejects. Ravan is fully attached to worldly things. He always wants what others have. He never built the city of gold — he drove out his brother, Kuber, and took over the kingdom of Lanka. Why did he abduct Sita? Avenging his sister’s mutilation was but an excuse; it was the desire to conquer the heart of a faithful wife. And during the war, he let his sons die and his brothers die before entering the battlefield himself.