The Sage who Went South 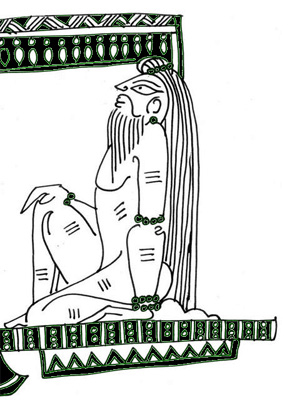 The Vindhya mountain range is still waiting for him to return. But he will not return for if he does then Vindhya will once again raise his head in pride and block the path of the sun. There is another reason why Agastya went south in the first place.

It is also said that once all the Rishis from all over the world went North to hear Shiva reveal the secret of the Veda and the Tantra. This caused the earth to tilt and so Shiva asked Agastya to go south and restore the balance of the earth for the spiritual weight of Agastya was equal to the weight of all the other Rishis put together.

Agastya had two fathers, the Vedic gods, Mitra and Varuna, and one mother, the nymph, Urvashi. He never wanted to marry and have children. But he was haunted by the vision of his ancestors hanging upside down over a bottomless abyss. There they would stay, they howled, until he married, fathered children and helped them be reborn.

And so after crossing the Vindhyas, Agastya asked a king for his daughter’s hand. The king, who lived in the region of Vidarbha, however was childless. “I give you the daughter I do not have,” said the king. So Agastya said, “You will soon have the daughter you do not have now but will soon give me.” Agastya then created a woman with his magical powers using the most beautiful parts of the birds and beasts of the forests. Since this woman was created by the loss (lopa) of the most beautiful features (mudra) of animals, she came to be known as Lopamudra. She was given to the king who then gave her in marriage to Agastya.

Lopamudra followed her rather short and stout husband dutifully but requested that he treat her as a princess that she was. “Approach me in clothes that are beautiful on a bed that is comfortable in a house that is prosperous.” Agastya, being an ascetic, had no access to such clothes or bed or house. So he went to other kings and sought gifts that would enable him to please his wife.

One of the kings he visited was a demon called Ilavala. Ilavala had a brother called Vatapi who could change his shape and become a goat. Ilavala would cut and kill this goat and serve the meat to guests. As soon as the guest ate the meat, he would chant a hymn that would bring his brother back to life in the guest’s stomach. Vatapi would then bore his way out of the guest’s body, killing the guest in the process. When Agastya sought gifts from Ilavala, he said, “Sure, but first you must eat.” Agastya could not say no but one bite of the food being offered and he knew mischief was afoot. Agastya ate the food quickly, then rubbed his stomach and burped loudly before Ilavala could chant the magic hymn. When the hymn was finally chanted Vatapi did not emerge much to Ilavala’s surprise. “Your brother, I fear, has been digested,” said Agastya with a smile, “Now, where are my gifts?”

Agastya’s amazing digestive ability led him to drink all the waters of the oceans enabling the Devas to find and kill Asuras who had hidden underwater. Later, he urinated out the water, and this, say some, is why the sea is salty.

On his journey south, Agastya carried a pot of Ganga water. When this pot was placed on the ground in South India, Ganesha, in the form of a crow, some say a rat, caused it to tip. Water flowed out of the pot and turned into the river Kaveri.

To remind him of the Himalayas, Agastya also carried with him two hills from the North. These were hung from two ends of a stick balanced on the shoulder of a Rakshasa called Hidimba (a style of transportation called ‘kavadi’). In the South, one of the hills became extremely heavy making it impossible for Hidimba to carry it further. On investigation, Agastya found a boy sitting on that hill. “These hills remind me of my home in the North,” said the boy. Agastya realized the boy was Kartikeya, the son of Shiva, who angry with his father, had moved south. Agastya asked the Rakshasa to plant the hill in the South wherever the boy asked him to. That hill is now called Palni in Tamil Nadu and is the sacred shrine of Kartikeya locally known as Murugan.

Agastya and Lopamudra are associated with hymns found in the Rig Veda. Both are said to have popularized Lalita Sahashranama, the 1000 names of the Goddess. Agastya is renowned in the South as the father of Siddha, the southern form of Ayurveda. He is also associated with occult arts of architecture and forecasting as well as formulation of the Tamil language. Even today a mountain peak between Tamil Nadu and Kerala associated with rare medicinal herbs is called Agastyamalai, or Agastya’s hill, a reminder of his presence in and contribution to civilization in South India.`