So many different Indras 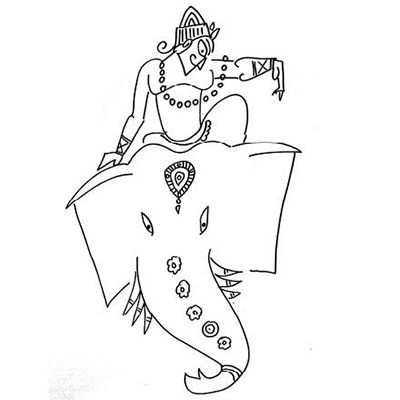 When we speak of Indra, we must keep in mind that the scriptures refer to six different types of Indra, belonging to different periods of history.

The first is the Vedic Indra. He is the primary god of the Rig Veda, described as riding a chariot, wielding a thunderbolt and releasing waters that are locked in enclosures, or overcoming obstacles known as Vala and Vritra. This is the fierce, warrior god who loves soma (amrit) and is invited to drink it by yagya performers.

The second type of Indra appears in Buddhist literature, in which he, along with Brahma, is a witness to Buddha’s enlightenment. He encourages Buddha to share his wisdom with the world. Indra here is the ruler of heaven, comprising 33 gods, located above Mount Meru. Indra’s wife, Paulomi, is actually, an asura’s daughter. These asuras live at the bottom of Mount Meru and constantly battle the devas.

In Jainism, Indra takes the form of the caretaker of the wise sages known as Tirthankars. Indra and his wife, Indrani, who is also mentioned in the Rig Veda, stand on either side of the Tirthankara, in positions of veneration. We are told that Indra is present at the time of each Tirthankar’s birth, the time he renounces the world, when he attains Kevala Jnana or omniscience, when he gives his discourses and when he, finally, rises to Siddhaloka.

Thus, in Buddhism and Jainism, Indra takes the form of someone who venerates the wise sages, very different from the Vedic Indra, a warrior god.

In Ramayana, Mahabharata and Puranic literature, we find the Indra that we are most familiar with: one who rides the white elephant, Airavata. He lives in Swarga, and enjoys soma-ras (seen now as an intoxicant), the dance of the apsaras and the music of gandharvas. He is surrounded by the finest luxuries in the world, and is extremely insecure that his power and position will be taken away by rishis, who perform tapasyas; by kings, who perform yagyas; and by asuras, who have magical powers. He is constantly seeking the help of his father, Brahma, to rid him of these threats.

Some argue that there is a seventh Indra. This Indra is found in the Upanishads. When approached by Prajapati, he becomes worthy as a recipient of the true knowledge of atma (soul or true blissful self), as against the asuras who choose ahamkara (ego or imagined insecure self).

Thus, we find different types of Indras, in the Indian scriptures. They reveal different periods in Indian history and different approaches to the divine.

This article is also listed under Jain, Mahabharata, Puranas, Ramayana