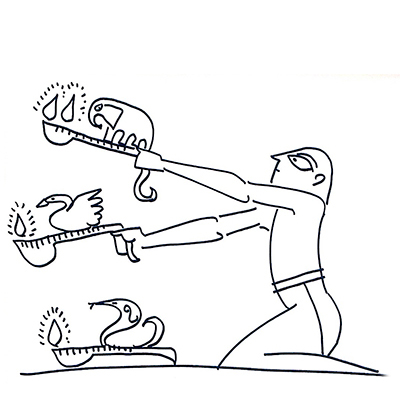 Senior managers are forced into workshops on ‘respect’ and ‘integrity’ as part of value week. I ask the trainer why is this being done and she says it is to reinforce values. I ask the trainer does she genuinely believe that senior managers need to be trained on the subject like domesticated animals. She chuckles and says she is simply complying with the high command’s directives. So I ask the high command. And the high command says this is global corporate ritual — you list a set of values in a workshop, you put it on the walls of your office, you conduct training programs, you create literature that leave people in no doubt what your values are and you make sure you rate people during appraisals on desirable values demonstrated. Does it make employees different, even better, human beings from what they were before they joined the company? No comment, says the high command.

More often than not, these values are nothing extraordinary. Most firms around the world share the same few words in their list of values: respect, integrity, loyalty, diversity, inclusiveness, leadership, responsibility, customer centricity, to name a few. However across the world, especially amongst social and environmental activists, all corporations — even those, or rather especially those, highly rated in stock markets and business journals around the world – are seen as the agents of evil capitalism that reduces everything and everyone into a commodity or a consumer. Hardly value-based.

Not long ago, there is a talented, successful and charming sport star that was brand ambassador to a very renowned auditing and consultancy firm. Then came a sex scandal and it was revealed that the sports star was living a double life. The firm immediately dropped him like a hot potato. Today the firm uses animals and plants instead in its advertising; no more unpredictable humans.

No one walks around saying they are villains. No one walks around claiming they have no values. Everyone assumes they have values. Problem is that their values are different from other people’s values. For many spiritual people, any one who has a profit-motive has no values, an idea that leaves many value-based management gurus red faced.

We can trace this corporate practice of stating and reinforcing values publicly to the biblical story of God carving benchmark behaviours expected by the tribe on stone tablets. This listing of expected conducted is not part of the Hindu scheme of things and so makes little sense to Indians. Non-Indians sense that. They see Indians as being too mercurial, shifty and in their words manipulative and inconsistent. At an International conference a speaker said rather candidly, “When I lose money in USA or UK, I say it is a bad investment. But when I lose money in India, I say I have been cheated.” This is corroborated by the low ranking of Indian companies in an index related to contractual sanctity. And so — in acts that reek of cultural prejudice — many multinational companies feel it is their duty to have extra value workshops for their Indian partners.

Traditionally, in India, no one spoke of values as a fixed behavioural output. People spoke of ‘bhaav’ which had two meanings: first, emotional intent that guided an action (kis bhaav se kaam kar rahe ho?) and second, value given to a person or thing (usko jyada bhaav mat do!). Value is subjective, based on an individual’s emotional maturity and perception of the context. Value is not objective, pre-determined by an external party and enforced on a community.

Take the case of respect: In the Western worldview, everyone must be treated equally; in the Chinese/Japenese worldview, respect is expressed ritually in deference to a well respected system of hierarchy; in the Indian worldview, it is all fluid, depending on power structures as perceived by the individual and shifting depending on the emotional maturity of the individual. Of course, the West values its framework of equality as superior to other frameworks.

All this makes values a complex issue that need to take cognisance of cultural realities — unless of course, we reject diversity and cling to the monotheistic mythology of one God, one truth, and one way of life.