Did Aryans Migrate Out of India to the West, or to the South? 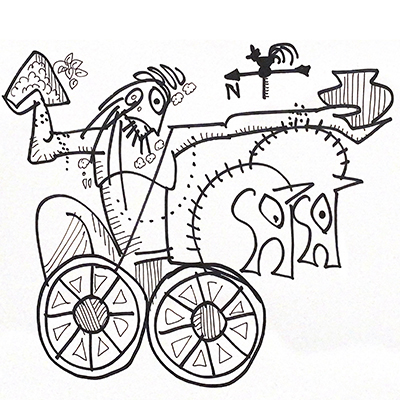 Three kinds of people love the word Arya even today. The first is the local Hindutva folks who insist ‘Arya’ refers to the best of Hindu civilization. The second is the White Supremacist of the Western world; they prefer the word ‘Aryan’ to Arya, and insist the original Aryan belonged to a White race from Scandinavia. The third is the Iranians whose king renamed their country from Persia to Iran in 1935 under Nazi influence, to remind the world that the pre-Islamic Zoroastrian Avesta scripture referred to the Iranian plateau as ‘airyanem vaejah’ or ‘the Aryan expanse’.

Nineteenth-century Europeans encouraged the ideology known as Aryanism that saw Aryans as a superior race, until the Second World War and the dreadful Holocaust. After that, Aryan became a bad word, and race science was no longer encouraged in Universities.

But this word is resurfacing in the 21st Century as part of culture wars in India, the Western world, and in Iran. In all three spaces, the ‘other’ to Arya is Islam. Hindutva ideology is fiercely anti-Muslim, to save Hinduism, which it refers to as Arya-dharma, and India, which is refers to as Arya-desha, from the rising Islamic tide that began with the Mughal invasions. The White Supremacists of Europe and America feel they are being threatened by an Islamic invasion of migrants from Asia and Africa. Iran is torn between its liberal pre-Islamic Ariyayi legacy and its conservative Islamic faith, where it plays second fiddle to the Arabs.

Dravida commonly means people of the South. And Aryan-Dravidian division poses a problem for Hindutva that wants to unite India into a single nationalist vote bank. By appealing to Islamophobia, they have managed to get support from many OBC and SC communities. Islamophobia works in the South too. But not the word Arya, which refers to the northern outsider in circles that pride themselves on Tamil identity.

All this started in the 19th Century. What started with curiosity about language, which is cultural, ended up as conversations about race, which is biological. Similarities in Sanskrit, Persian, Latin and Greek languages led to the theory of Aryan race extending from Europe to India. People wondered if Indians came to Europe via Iran or was the movement from Europe to India through Iran. Ideas about Aryan origin and migration shaped nationalism across Europe, Iran and India. Science was put in the service of propaganda. Germans insisted that the original Aryan homeland was in Scandinavia: the land of white folks with blonde hair and blue eyes. Indians have always valued fair skin over dark skin. This Aryan Invasion Theory (AIT) a simple explanation for the caste system of India. It was approved by those who opposed the caste system, and those who saw Brahmins as political rivals. Hindutva offered a counter ‘Out of India’ (OIT) narrative that made India the original spiritual homeland. If not India, then Tibet. Germans spoke of migration because of the Great Flood from Atlantis, then Tibet, then Scandinavia, with corrupt Aryans turning into Hindus and Buddhists. None of these theories have any scientific evidence. But they are still popular in Aryan and Hindutva circles.

If we accept that ‘real’ Aryans came from Tibet and went eastwards to Europe via Iran, it would mean they also went southwards also, beyond Vindhyas towards Deccan and Tamilakkam. That would mean Aryans are not native to the south, right? In the Hindutva discourse, all of India was filled with uncivilised savages, the An-arya, who were convinced to adopt the Aryan way. Arya then becomes more a cultural term than a racial term. Arya becomes synonym to the Hindutva version of Hindu, one who loves Hindu Rashtra, and sees Hindu Rashtra as the holy land. This excludes Muslims as they see Mecca as the holy city. And Christians who see Jerusalem as the holy city. The word ‘Arya’ is favoured by those who feel the word ‘Hindu’ has Persian roots. The same reason they prefer Bharat over India, as the word ‘India’ has Greek roots.

The word Dravida was probably used for the first time by Adi Shankara in the 8th century. And words like Pancha-Dravida Brahmins occur in the Rajataringani of Kalhana written in the 12th century, and in Maratha bureaucratic records.But the Dravidian language group was identified in the 19th Century, and as in case of Indo-Europeans, it gradually became about Dravidian race theory. This led to the very successful Dravidian political movement against Brahmins and Hindi in South India. Despite its very public, and some would say, rather cosmetic inclusion of OBC, SC and ST to expand its vote bank, the Hindutva movement remains firm in its love for all things Brahmin and Hindi. Some will offer apologetic explanations like caste is division of labour and that Brahmin is not a caste, but a state of mind, and that can be ‘true’ Hindus/Brahmins/Arya by voting Hindutva into power. They will debate how Hindi is not Urdu, and so is Arya-bhasha just like Sanskrit, and Tamil and Sanskrit have the same roots, that are indigenous, not foreign.

Arya and An-arya in Jainism and Buddhism

Blaming Europeans for the Arya-Dravida divide is easy. But in early Dharma-shastra, Arya-varta was restricted to Gangetic plains. Later Dharma-shastra, like Manusmriti, expanded the region to include all of South Asia. But not Iran. or Southeast Asia, which are claimed as Akhand-Bharat by Hindutva lobbyists. Manusmriti used the word An-arya for Shudra (low caste) inside India and for the Mleccha (foreigners) outside India. In Manusmriti, Manu clearly differentiates between Arya by birth, Arya by looks, and Arya by behaviour. Ideally the three should be aligned. But the frequent misalignment exasperated him. He preferred children of Arya men birthed by An-arya women to children of An-arya men birthed by Arya women.

The southern people were first identified as Chera, Pandya and Chola in Ashokan edicts 2300 years ago. Ashoka knew a society dominated by two competing schools – the Brahmanas and the Shramanas. Shramanas included Buddhists and Jains who were rivals of the Brahmins for royal patronage. All three groups used the word Arya as an adjective for noble people as in the Vedic scriptures. It is never clear if the identity is biological or cultural.

Jain scriptures refer to different types of Arya based on birth, location, vocation, and behaviour. The Arya-varta of the Jain and Buddhist world expands to include a wider region, beyond Gangetic plains, often including Magadha, Odisha and Dravida, regions that were originally not part of the Vedic world. While Hindu scriptures exclude the An-arya, Jainism and Buddhism are shown to include the An-arya and transform them into Arya through the dharmic discourse. If Hindu Puranas tell how Vishnu shoved the Asura-king Bali under the ground, and Ram killed the Rakshasa-king Ravana, Buddhist stories tell us how Arya-dharma was taught to Bali so that he could become Tathagatha in a future life, and Jain stories tell us how Arya-dharma was taught to Ravana so that he could be Tirthankara in a future life.

In 1500-year-old Buddhist scriptures, the guardians of east and south are Arya, while guardians of north and west are An-arya. This is quite the opposite of what we know from the Aryan Migration Theory (AMT) based on genetic and linguistic research, that both proto-Indo-European language and the proto-Indo-European men came to India from the Northwest 3500 years ago. These foreign men probably married local women and composed hymns in the Punjab-Haryana region in a new language, Vedic Sanskrit, before migrating and settling in the Gangetic plains in the Iron Age (1000 BCE).

In 2000-year-old Sangam literature, we get a glimpse of a Tamil society gradually getting exposed to Buddhist, Brahmin and Vedic ideas from the North, but having its own independent identity. A meeting between otherwise warring Chera, Chola and Pandya kings is equated to the three Vedic fires. There is knowledge of the Ramayana story of monkeys finding Sita’s ornaments cast on the ground as she was being abducted by air to Lanka. There is a story of a southern king feeding soldiers who fought at Kurukshetra. Local gods include Vedic gods Indra and Varuna, and non-Vedic gods like Mayon, Ceyon and Kotravai. The culture described is very different from the ritualistic and purity-conscious world in North India, full of longing lovers and fierce chieftains.

As Brahmins became powerful in the South, receiving land grants from the 3rd century onwards, they wrote texts that valorized Vedic ideas. So we are told stories of rishis like Agastya who to the south from the north, carrying mountains and rivers with them, that gave rise to the southern mountains and rivers often identified as Dakshina-Kailash, and Dakshina-Ganga. These tales are clearly tales of migration.

Aryas did come from North India to South India and expanded the notion of Arya-desha. Hindutva folks will never accept this. Just as no White Supremacist will accept OIT. Even Iranians prefer the 19th century AIT propaganda over the 21st Century scientifically sound AMT. In fact, in 2004, some Iranians even greeted German footballers with Hitler’s infamous salute at the Azadi Stadium in Tehran. Hindutva trolls can bully the Arya or the Dravida of India, but they can never convince the Iran Ariyayi, or White Supremacist Aryans.