A Job for Disabled Gods 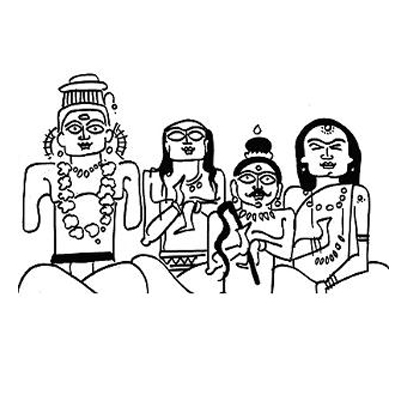 In Mesopotamian mythology, comes an interesting story about disabled beings. Enki created the first human beings and they were all given various tasks to do on earth. This liberated the gods from doing any chores and they could spend all their time in leisure. One day, in a spirit of play, having consumed too much wine, Ninmah, the goddess, said that she could create imperfect human beings. Enki said, “You may make them imperfect but I will ensure they have a task so that they can perfectly fit into human society.” To test Enki, Nimah created a blind man; Enki turned him into a musician. Ninmah made a man without hands; Enki made him a spy who tells the king all that he sees. Ninmah made a man who could not speak; Enki made him give the king a bath in silence, a respite from palace chatter. Ninmah created a barren woman; Enki turned her into a courtesan. Ninmah created a sexless being; Enki turned him into the custodian of the king’s harem. Ninmah finally gave up for she realized Enki could turn every disadvantage into an advantage.

Krishna is described as beauty personified. Yet, his image as Jagannath in Puri, Orissa, is rather deformed. It has no hands, or a leg. The lips and nose are painted on. The eyes have no eyelids. And there are no ears. Often during festivals, artificial limbs of gold are given to the deity to complete him. The story goes that when the image was being carved, the sculptor had asked the patron king not to open the door until the work was completed. But he did, when he did not hear sounds of the wood being carved and polished. Thus the idol remained incomplete. In devotional songs, the incompleteness of Jagannath’s idol is often highlighted. And we wonder if there is a deeper meaning to Jagannath’s incompleteness. Is Jagnannath embodying a disabled person to remind ‘abled’ beings that we must not lose sight of those who are different from us, those who consider to be incomplete, damaged or abnormal? Does it express the essential incompleteness and imperfection of all things around us?

In the Puranas, we are told that Vinata, wife of Kashyapa, once laid two eggs. They did not hatch for a long time. Impatient, she broke one of the eggs. The child that emerged was incomplete — its lower half was malformed, it has no legs or genitals. This child came to be known as Aruna, god of dawn, and is was given a place in the pantheon of Hindu gods as the charioteer of the sun-god. Because its lower half is malformed, there are always questions if Aruna is male or female. In earlier Vedic texts, the god of dawn, charioteer of the sun, is described as a woman, Ushas. Incomplete or not, this disabled child of ambiguous gender is given a place in the sky.

But in the Mahabharata we see a very different society. A man with skin disease, Shantanu’s elder brother, Balhika, is not allowed to be king. Later, Dhritarashtra, a blind man is not allowed to be king. We are told because kings have to be complete. When Pandu is cursed that he will not be able to father a child, he also renounces the throne voluntarily. All this perhaps shows a growing discomfort with disability, a society that does not know how to make room for those they find unfit.

In the jungle, a disabled animal is killed instantly. The rest of its herd or pack does not stop to save it. The jungle does not care for the unfit. When humans behave similarly it indicates we are no different from animals — we have not yet embraced our humanity and become civilized.

Why do we reject people with disabilities? Why do we want to isolate them? Why do we not want them to be seen in our midst? Do they frighten us by their dependence? Does their demand for empathy exhaust us? Perhaps the stories of Dhritarashtra and Aruna and the image of Jagannath are meant to make us think about these questions and our attitudes towards disabled people.

Many businesses are increasingly asking whether their organization structure consciously makes room for disabled people. This is not seen as charity, or corporate social responsibility. This is seen as a business lever that adds to the competitive advantage and is a viable proposition contributing to the balance sheet.

It is all about doing a SWOT analysis looking at disabled people as ‘differently’ abled. So there are jobs in the manufacturing and service sectors that can be done better by blind people who cannot afford to make mistakes or people with hearing problems who can handle jobs in spaces with high noise pollution, or autistic people who need very little training and can do repetitive jobs for long periods without getting bored. This can only happen when corporates see themselves as contributing to society as a whole while contributing to shareholder kitty.