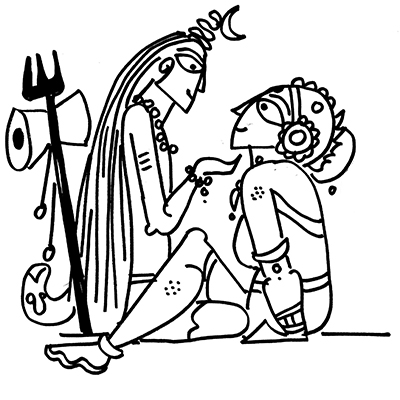 When we read stories of Shiva, there is a constant reference to how he is forced to marry and produce his children, Kartikeya and Ganesha. When Shiva gets married, he comes down from the mountain Kailasa, which is cold, where no vegetation grows. He descends with his wife and moves to Kashi, a city on a riverbank, which is warm, wet and fertile, where there are markets, crematoriums and pleasure gardens. It is where life happens, trade happens, business happens.

Why is this story being told? Why does Shiva, the hermit, turn into Shankara, the householder? Why does he get married? Why does he come down from the mountain? Why does he (reluctantly) produce children?

This story is repeated again and again because value is given to the fact that while the supreme hermit, Devon Ke Dev Mahadev, may not be hungry, the people around him are hungry. Should he not take care of people who are hungry around him?

This empathy is what the marriage of Shiva represents. He comes down from the mountain and learns the ways of the world, in order to provide for his children.

Observe how his two children, Ganesha and Kartikeya, are different. If you do darshan of the two children, you realise that they take care of our basic human needs. What are our basic human needs? To manage our hunger and to manage our fear. Ganesha, with his rotund belly, embodies food, affluence, abundance, and is closely associated with Lakshmi and therefore, he takes care of our hunger. For him, his mother is not Durga but Annapoorna, the kitchen goddess. Kartikeya is associated with brawn and stands with a spear. He is the warlord of the gods. He protects us, as Durga protects us. So, he is the one who guards us. Thus, together we see that Shiva’s children take care of basic human needs. There is an acknowledgment of the need for Lakshmi and Durga, in our lives — for income, as well as insurance.

Shiva, who wants for nothing, is thus enlightened by the goddess and is made aware of other people’s hunger. This concept, of other people’s hunger, is not there in Swarga. If you look carefully, Indra is not ever seen as someone who takes care of people. No one goes to him for help as they go to Vishnu or Shiva. He is taking care of himself; he is enjoying himself in the ‘Indrasabha’, with his apsaras, and the gandharvas and somras: he is not taking care of others. Therefore, nobody worships Indra, while everybody worships Shiva.

Shiva’s marriage counters Buddha’s act of leaving his wife, children and kingdom for the sake of enlightenment, which grants freedom from suffering. This was the Hindu response to Buddhist doctrine, dharma instead of dhamma, family and empathy over isolation and wisdom. While Shiva is a god who is mentioned in Vedic and Upanishadic traditions, so before Buddha’s times, his story as husband and father and householder appear only in the Ramayana and Mahabharata, after Buddha’s times. Marriage here is a metaphor for social engagement. If Buddha was offering freedom-from suffering (nirvana or moksha) to the common man, Shiva was offering freedom-within-society (jiva-mukta). Here the point was not separation from relationships (viyoga) but immersion in relationships (yoga). This is the Puranic revolution that enabled Hinduism to thrive while monastic Buddhism waned from the Indian subcontinent.