What Does Haraam-Khor Actually Mean? 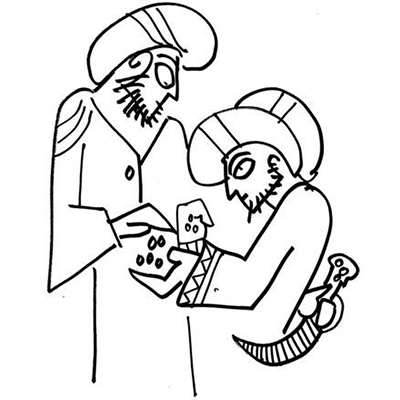 It’s a word that is used often in Bollywood and the political circles of India, even amongst Hindutva followers, though the word has roots in Islamic and pre-Islamic traditions. It is a word that came with the Persianised Turks over a thousand years ago, into the subcontinent.

We often hear—especially in South Asia—words like ‘namak halaal’, which refers to feudal loyalty, to the one who feeds, the employer, the master, considering many Persianised Turks followed the system of voluntary slavery, binding themselves to a warlord in exchange for food. ‘Namak haraam’ was to betray the person who gave you salt.

The importance of these words had a clear influence in the Salt Satyagraha. Gandhiji, who was an astute political communicator with a deep cultural connect, realised the value of salt in Indian households, and used it to make political statement.
Where does this importance of salt come from? People are not sure of the origins. We hear of the importance of salt in the Arabian Nights tales, of how, in Ali Baba and the 40 thieves, the chief of the thieves is caught when he tells Ali Baba’s cook not to put salt in the meals. So, he does not become a namak-haraam. Some believe this is not an Islamic idea, but an idea that came into the Islamic world from the Slavics, or the East European races where the offering of bread and salt is part of hospitality. When you accept a person’s hospitality, you accept the bread and salt.

We know that from a historical point of point, salt is not manufactured or traded by hunter-gatherer communities. Salt becomes an important part of our diet after the Neolithic Agricultural revolution. Since then, rock salt can be obtained from mountains or from the sea. It was traded and used as major gifts and offerings since ancient times. In Shakespeare’s play King Lear, it is silent indicator of the all-pervasive love. Ancient Romans gave their salaries in the form of salt. This was ‘salarium’, the Roman monthly quota of salt, from where comes the word salt.

Salt is used around the world to ward off evil. This practice is called ‘nazar utaarna’. It is used in India and in the Middle East. It is also used in Japan where sumo wrestlers sprinkle salt before entering the wrestling arena. Salt is also used in Christian communities where it is believed that witches do not eat salt, and the Devil fears salt.

Thus, we see a deep cultural connect associated with salt. Consuming someone’s salt bound one to the code of loyalty (halal) and breaking it was as bad as breaking God’s law (haram). A concept that came with ‘foreigners’ but is very much part of Indian ethos today.