Use for Rudolf’s nose 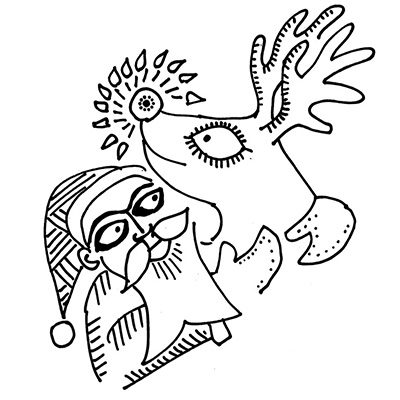 Do you remember the story of Rudolf, the reindeer, who had a shiny red nose? And how every other reindeer made fun of him? His father even asks him to hide his nose so that he fits in. But then, Santa Claus looks at him, and finds his shiny red nose very useful: as the leader of the pack of reindeers pulling his sleigh through the snow, his shiny red nose could serve as a bright indicator in the dark foggy winter nights. This is the story of the person who does not fit in society’s clearly defined roles: the outsider, the queer. How is that misfit included in society, made useful, rendered valid?

We all have a shiny red nose. Some of us want to hide this from society lest we are mocked and rejected. We want to fit into the tribe. Some of us use that red nose to ensure they are never part of the group – thus asserting our individualism. Most of us are somewhere in between, revealing our shiny red nose when we feel we will not be rejected for it, or when we feel we will be admired for it. Sometimes, all reindeers with red noses come together and form a group of the persecuted minority or the group of the contributing minority. We feel such an organisation will protect us from bullying by the regular reindeers. The greatest fear is that Santa Claus will not find us useful, and so exclude us from his herd, or worse, get us culled.

Gay, lesbian, bisexual, transgender, inter-sexed and other such queer people are used to this discrimination by political and religious leaders, who have somehow decided that anything related to sex and sexuality is unholy and non-Godly. Even heterosexual men and women, who choose not to marry, or stay monogamous, are seen as dangerous misfits, who need to be ostracised. Disabled people need to constantly prove they are differently abled, so valuable, so valid in society. These are the very obvious Rudolphs of our society.

In Babylonian mythology, in a drunken party, the gods play a game. They create different types of humans using clay, and challenge Enki, guardian of humanity, to give these queer creatures a role. To the blind man, Enki gives the role of musician. To the infertile woman, he gives the role of a courtesan. To the eunuch, he gives the role of a scribe. Thus, every Rudolph is made useful. The lesson being, to exist in society, we all have to prove our usefulness. And, to allow our difference to thrive, we have prove that our difference adds value.

So, we now find scientific papers in Dr James O’Keefe’s TEDx talk, explaining why nature creates queer people. There is increasing evidence that it is not an accident but part of the design, an intra-uterine epigenetic calibration in response to the mother’s external ecosystem. It is nature’s way of ensuring that everyone is not bound to the fertility wagon. That there is someone in the herd, pack, hive or tribe, who thinks differently about life, love, pleasure and play, and is not consumed with childrearing and inheritance. This study suggests that nature deliberately produces Rudolphs because diversity is nature’s way, not homogeneity.