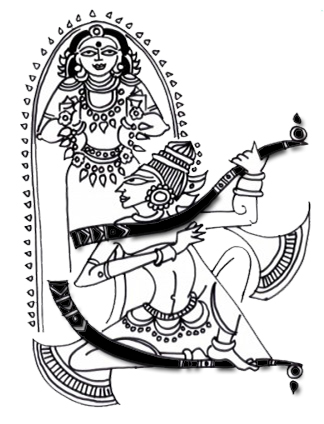 In the Ramayan, Ram is asked to string a bow — a feat that will win him the hand of Sita in marriage. Ram, however, bends the bow with such force that it breaks. Since no one until then had even been able to pick up this bow, Sita’s father is so impressed with Ram that he is more than happy to accept him as his son-in-law.

One cannot help but wonder:  Why did Ram, known for his obedience, break a bow that was supposed to be strung? The bow is an ancient symbol of kingship. It represents poise and balance, useful only if the string is neither too loose or too tight. That Ram, the ideal king, breaking a bow in his youth is surely an act of some significance. No ordinary bow this: but the bow of Shiva, the great ascetic.

With a wife by his side, Ram’s father feels he is now old enough to be king and so declares his decision to retire. Unfortunately the planned coronation does not take place. Palace intrigues force Ram to go into forest exile instead. Is there a correlation between the breaking of the bow and the denial of his kingship? The epic does not say so explicitly. Nor has any scholar commented on it. But the question is an interesting one. After all everything in Hindu narratives is symbolic and there is surely here a meaning that is waiting to be decoded.

Ram’s breaking of Shiva’s bow probably suggests an act of passion and attachment, for Shiva is the god of renunciation and detachment. Is that why he is considered unfit to be king? Is that why he must go into the forest for 14 years, and return only when he has cultivated adequate detachment? Observe the almost inhuman lack of passion displayed by Ram, fourteen years later, when he finally kills Ravan and rescue his wife Sita. He tells her that he killed Ravan not to rescue her but to uphold dharma and clear his family’s honor. It is almost as if showing feelings for one’s spouse is unacceptable for one who seeks to be king. He had shown his passion once, when he broke the bow. He shall not do so again.

The ancient seers demanded such detachment from kings. Kingship had to be more important than family. That is why Ram is put on the highest pedestal. One may not quite agree with this philosophy today, but it is clear that the epic considers the years in the wilderness not as a tragedy but as a period to mature until one is ready to truly wear the crown.

This theme of ‘growing up’ in the wilderness is repeated in the Mahabharata. Krishna helps the Pandavas establish the kingdom of Indraprastha. But the five brothers foolishly gamble away their kingdom in Krishna’s absence, a crime for which they have to suffer thirteen years of exile. When Yudhishtira moans his fate, the sages tell him the story of Ram who suffered fourteen years of exile, one year more than them, and that too for no fault of his. They tell the Pandavas to stop whining and use the period in the forest to learn. And they learn: Arjuna learns humility when he is defeated by a common hunter (Shiva in disguise) in battle, Bhima learns humility when he is unable to lift the tail of an old monkey (Hanuman in disguise) and all the brothers learn humility when they are forced to live as servants in the final year of exile. Only then does Krishna lead them to a triumphant battle against their enemies.