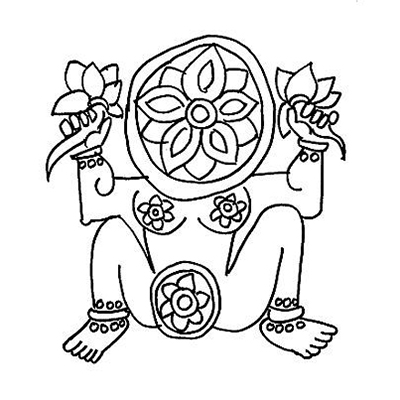 She has no face. Only a body with a lotus for a head. Images of this faceless woman have been found all over India. They were molded out of clay and carved in rock between the third and eighth century CE. Knees bent, feet spread apart, breasts and genitals exposed, her characteristic posture is described in the Rig-Veda, the oldest and most sacred of Hindu scriptures, as one from which sprang the earth. Known as uttanapada, it is the position taken by a woman when she is making love or delivering a child.

Who is this faceless woman? A lover? A mother? A goddess? Nobody knows. Orthodox scriptures offer no explanations. There is no direct reference to such a goddess in Hindu liturgy. The archeologists and art historians have decided to call her her ‘Lajjagauri’ or the shy mother, indicating the embarrassment of the modern academic gaze.

Villagers, many of them laborers who come from the lower strata of the Hindu caste-hierarchy, seem more familiar with this icon. They identify her of the primal mother goddess, the life-giver, the life-sustainer, the life-taker. They call her Adya Shakti (primal energy), Bhu-devi (earth-goddess), Renuka (soil-maiden), Yellamma (everybody’s mother), Sakambari (mother of vegetation), Nagna-Ambika (naked mother). From her comes life. Without her there would be no life. Brahma may be creator in the margi or classical Hindu tradition but in the desi or folk traditions, all creation comes from the creatrix — the Goddess

Woman gave man access to samsara. Through her womb, the dead return to the land of the living. In her arms, man finds pleasure. In pleasure, he acquires family and becomes lord of the household. Family responsibilities give man the moral right to own property and wield power. A wife is the key to worldly pleasure, kama and worldly power, artha. She is therefore referred to as Griha-Laxmi, the household goddess of fortune, a diminutive double of Maha-Laxmi, the cosmic goddess of fortune, who gave devas all that they desired when she emerged from the ocean of milk.

This is what the Lakshmi Tantra has to say about the birth of Lakshmi, “As the gods and demons churned the ocean of milk, rasa coagulated and began to take wonderful shapes. Laxmi, the goddess of abundance and affluence, emerged dressed in red, bedecked in gold, seated on a thousand-petalled dew-drenched lotus. Dhanavantari, the god of health, stood besides her holding a pot containing the nectar of immortality, amrita. To enjoy the eternal life guaranteed by amrita, the goddess brought along many magnificent gifts. There were gifts that guaranteed prosperity — Kamadhenu, the cow whose udders were always filled with milk; Kalpataru, the tree whose branches were always laden with fruit; Chintamani, the priceless wish-fulfilling gem. There were gifts offering pleasure — Chandra, the handsome moon-god; Rambha, a ravishing nymph well versed in the erotic arts; Varuni, the goddess of wine. There were also gifts of power — Airavata, the six-tusked white-skinned royal elephant; Ucchaishrava, the virile seven-headed battle-horse that always broke through enemy lines; Saranga, the bow that never missed its target; Panchajanya, the conch-trumpet that scared away rivals. With these gifts, the goddess brought worldly joy into the wheel of existence.”

The tale of Laxmi’s emergence from the ocean is an integral part of Hindu narrative tradition. It is found in almost every sacred book and is recounted during wedding ceremonies. By capturing the Hindu vision of paradise where there is eternal health, wealth, power and pleasure, it suppresses the fear of death, change and hopelessness. For the death-fearing celestial beings, the goddess Laxmi offers what a woman, at a microcosmic level, is believed to bring into a household — the promise and pleasure of worldly life.

Without a woman, according to Hindu scriptures, a man can only be a brahmachari, a chaste student or a sanyasi, a celibate hermit. Without a woman by his side, a man is forbidden from performing yagnas. Only when he is a grihastha or householder do gods accept his gifts and bestow him favor. The wife is sowbhagyavati, the bearer-of-good-fortune. She is like the goddess whose absence creates havoc in the heavens.

“Rambha offered the sage Durvasa a garland of celestial flowers. Durvasa decided to give it to Indra, king of the devas. Indra was too drunk to appreciate the gift. He placed the garland on the trunk of his elephant Airavata. Airavata threw it on the floor. Ucchaishrava, the seven-headed horse of Indra, walked over it. Infuriated, Durvasa cursed Indra that he would lose Laxmi’s favor. Instantly, the goddess returned to the ocean of milk. Kalpataru withered. Kamadhenu refused to shed milk. Chintamani lost its luster. To win her back, the devas had to once more churn the ocean of milk.” So says the Bramhavaivarta Purana.

When a new bride steps into her husband’s house for the first time, dressed in red, bedecked with flowers, jewels and sixteen love-charms, conches are blown and grains of rice sprinkled. With her comes the happiness of the present generation and hope of the next.