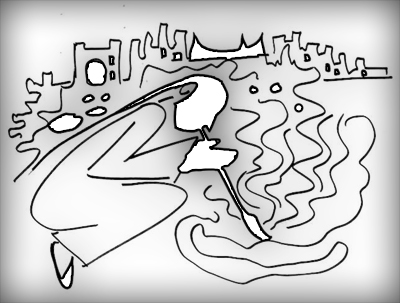 I recently saw a copy of Amar Farooqui’s book, Opium City. It revealed a historical detail that is very difficult to swallow: Mumbai’s propserity is rooted in the Opium Trade of the 19th century. Some of the most respected business families today owe their fortune to that vile practice. Some of the city’s memorable buildings were financed by this terrible trade.

So what was this Opium Trade? The British East Indian company was one of the first companies in the world that had ‘shareholders’. To pay shareholders, the company had to make huge profits. So the Company forced Indian peasants to grow opium, instead of grain. This opium was sold in China in exchange for highly profitable tea. So India became poor, an entire generation of Chinese became opium addicts, in order to make the Company, and later the Empire, rich.

The best quality opium was grown in Malwa and since much of India then was not quite under the Company’s control, the only way to access this opium was to smuggle it via Rajasthan and Karachi to the Bombay fort. Many now respectable Indian business families (allegedly and apparently, for everyone denies it now) participated in this lucrative trade and made huge fortunes.

When I watch films like Young Victoria, The King’s Speech and The Queen I can’t help but feel this is subtle propoganda to re-establish the nobility of a tethering British royal family, and I wonder if the rulers portrayed ever took responsibility for the Opium Wars that filled their coffers as they blessed and taxed and finally controlled the East India Company’s shareholders. Likewise, do we?

I imagine Chinese students being taught this history: How the West abused it for its profit and how Indian business families participated in their downfall. This could be the reason why the Chinese do not have a great relationship with India, and look at everyone with suspicion. How does one rectify it?

They say children inherit the sins of the father. The Mahabharata refers to this concept again and again. How crimes committed in an earlier generation end up affecting a later generation. The epic begins with the story of Janamejaya angry that his father has been killed by a snake, until he is told that his great grand parents destroyed an entire forest that was home to thousands of snakes. Even the horrific war at Kurukshetra, like the World Wars, is not merely the fight of cousins, but the outburst of several generations of rage and denial and frustration and envy. That is why these stories look not at one generation but at several.

So long is the history and so deep is the wound that everyone assumes they are the victims and no one is prepared to take the responsibility of the villain. Such is life. There are no heroes or villains, just people who choose to exploit, people who seek retribution, people who cannot forgive and people who shy away from responsibility but yearn for nobility.

This article is also listed under Mahabharata, Myth Theory