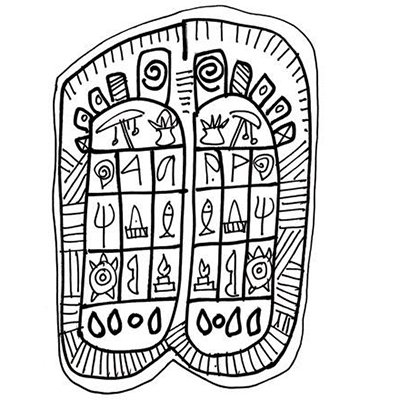 In the Mahabharata, there is the story that the sun-god invented the footwear, and the parasol, to protect people’s feet from getting burnt on the ground heated by the summer sun. Sages were angry with the sun as their wives were complaining and were planning to take away the sun’s heat. In art, the sun-god is shown wearing boots up to the knee. This was introduced to India by Kushan kings about 2,000 years ago.

When we talk of footwear, one of the most famous stories we get is of Ram. Ram goes to the forest in exile. His stepmother demands that her son should be king of Ayodhya instead. Ram goes to the forest without remorse or regret. His brother, Bharat, however, on learning that the kingdom has been given to him through his mother’s political manipulations, rejects the kingdom. He goes to Ram, and insists that he returns and becomes king. Ram says that he has given his word to his father that he will live in the forest for 14 years. Therefore, Bharat insists that Ram should symbolically be seen as the king of Ayodhya. Bharat will manage his kingdom, in his absence, as regent. To symbolically represent him, he asks Ram to give his footwear. Therefore, Ram agrees. Bharat brings the footwear to Ayodhya and places the sandals on the royal throne.

A similar story is found in the Buddhist Dashrath Jataka. The tale has an abbreviated or a modified form of the Ramayana. Here, there is no mention of Ravan in this tale, though. Ram-pandita, the eldest son of the king, is told to go to the forest for 12 years because his father fears that his stepmother will kill him. He is told to come back after 12 years, when as per astrologers, Dashrath will be dead and Ram-pandita can rightfully claim the throne. However, while astrology predicts that the father would die after 12 years, he dies much earlier, after nine years. Bharat refuses to be king and instead goes to the forest and tells Ram-pandita to come back. But Ram-pandita insists that he will stay in the forest till the stipulated period of exile is over because that is the word he gave. This integrity of Ram-pandita reveals he is the Buddha-to-be or the Bodhisattva. Even here, straw footwear is taken and kept on the throne, till the time of his return three years later.

By placing one’s head on the feet of holy men and gods, the common man demonstrated veneration. To have a divine foot on one’s head granted one access to spiritual realms.