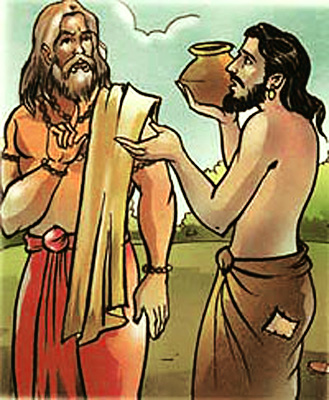 The sage Uttanka stood in the middle of the desert.  He was suddenly thirsty. He remembered a promise made to him by Krishna long ago, “I will bring you the nectar of the gods whenever you genuinely yearn for it.”  Yes, that is what Uttanka genuinely wanted at that moment: nectar of the gods.   He shut his eyes and wished for it.  He opened his eyes expecting a smiling Krishna to stand there with a cup brimming with sparkling nectar.  There was no Krishna. There was no one, just a vast sandy emptiness stretching to the horizon.

Uttanka was irritated.  He shut his eyes once more and wished for nectar and remembered Krishna fervently.  This time when he opened his eyes, he saw a beggar covered with filth holding a dirty stinking bowl in his hand. It contained water. “Drink,” said the beggar, “You look thirsty.”  Uttanka turned away from him, repelled by his ugliness. The beggar went away.

Uttanka was now parched. In fury he yelled, “Keep your promise, Krishna.”  A voice boomed from the sky, “I did. I forced Indra to offer you a bowl of nectar.   He just did. And you just refused.”  It dawned on Uttanaka that the filthy beggar who offered him a bowl of water was actually Indra offering him nectar.  He had assumed how Indra should look.  He had paid a price for his assumption.

There are many Uttanakas in the corporate world, men who believe packaging is an indicator of content. Prashant is one such Uttanka.  He is the owner of a medium sized BPO.   One of his young executives, Suhas, came up with a wonderful idea of shift rotation to improve performance and reduce attrition. Suhas was a young man of twenty-six who had spent five years in the BPO learning the ropes.  He did not know English but that did not matter since the calls he serviced were for the local market.  He was not even a graduate; he could not afford to go to college and needed to work.   He was hired by the organization because he came very cheap. But despite his background,  Suhas was extremely sharp and sensitive.  He recognized the problem that the BPO was facing and came up with a deceptively simple way of overcoming it.

Unfortunately, when Suhas presented the solution to Prashant, he found himself being dismissed.  Prashant did not even hear him out completely because he assumed someone as young, poor and barely qualified as Suhas could not possibly solve his problems.  A year later, Prashant hired a consultant.  After six months of investigation, the solution that emerged was exactly what Suhas had come up with almost eighteen months earlier.  Prashant kicked himself for not listening to Suhas as he signed the cheque for his very expensive consultant.

Sandeep, however, has accepted the existence of  Uttankas in the market place.  He has to deal with many governmental agencies. He knows that whenever he asks for an appointment, he will not get it.  He will be shunted from one desk to another. Ministers and bureaucrats simply give him the run around.  In frustration, he came up with a rather shallow idea.  He hired Bob, a tall blonde big built bearded Australian youth, who was keen to gain some experience in third-world markets. Bob was given the designation of Chief Consumer Strategist.  Every time Bob called the government agencies, he was given appointments. Sandeep knew it was because of his Australian drawl.  Every time Bob entered the offices, along with Sandeep, he was taken straight to the minister or the senior bureaucrats, the very same people who never gave Sandeep the time of the day.

In wry amusement, Sandeep observed how everyone ignored the fact that Bob was too young to be a Chief anything.  Bob gave a small speech after which Sandeep made the real pitch. Invariably, the deal would go through. Sandeep was very happy.  One day, he told Bob, “They are so eager to impress the white guy that they are willing to sign on any paper.  That makes you a very useful tool for my business.”  Bob did not feel bad at the racist jibe; he was learning an important lesson in marketing.  For some people what matters more is the packaging, even at the cost of the content.