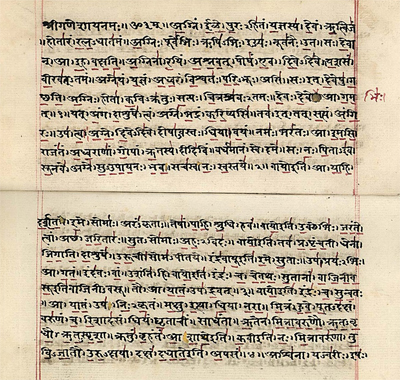 In the Rig Veda is a hymn that describes society as Purusha, a living breathing organism, whose head is made of knowledge-driven Brahmins, hands are made of power-driven Kshatriyas, trunk is made of economics-driven Vaniks and feet are made of laboring Shudras. The word used in the Rig Veda for the parts of the Purusha is ‘varna’, which literally translated means color. This led 18th century European Orientalists to conclude that color-conscious racists, very much like them, chanted the hymns and that this was the root of the caste system. But the word used for caste by the natives was jati. It was assumed by the Orientalists that varna and jati were synonyms. Modern historians, however, now realize that the two words mean very different things.

Varna had a symbolic meaning; it meant ‘disposition’. Jati meant profession. Both were determined by birth but varna was natural, while jati was cultural. So it was possible for a child born in the family of priests or weavers,to have the disposition of an intellectual or a politician or an economist or a follower. While jati was meant to create social stability (every child was apprenticed in his father’s domain), varna indicated that not all members of a particular jati had the same motivations. There were temple priests with intellectual, political and economic disposition, and temple priests who just went with the flow. Likewise, there were weavers with intellectual, political and economic disposition, and many who just went with the flow.

But to identify varna, one had to pay a lot of attention to people. It was not as easy to identify as jati. Over time, as society expanded, people stopped paying attention to people. Varna was abandoned and jati reigned supreme. Varna and jati became synonyms. While once, the intellectual temple priest and intellectual weaver could have had a conversation, now the temple priest with a follower’s disposition dominated all weavers, disregarding their dispositions. It was only a question of time before a rigid hierarchy emerged, which led to denial of resources to some groups and acquisition of resources by other groups.  This is what happens say the scriptures in Kali Yuga. Varnas get ignored and confused. Society loses its ethical and moral fabric, and eventually collapses.

Jagdish insists on hiring managers from B-schools only. He assumes that because they come from a B-school they are all good managers. He does not believe that his factory workers can be good managers. “They are mere matriculates!” he exclaims.

In the business world, educational institutes are the new ‘jatis’. One assumes because the ‘father’ (the institute) is container of all knowledge, it is passed on to the ‘sons’ (the alumni). Attention is not paid to the ‘varna’ or disposition of people in an institute. Every batch has its share of intellectuals, politicians, economists and those who go with the flow.

Jagdish who dismisses his worker staff as ‘mere matriculates’ believes in ‘jati’. He does not see the varna of the workers. He does not realize that not all workers are followers; amongst them are intellectuals who come with new ideas, politicians who can get people to follow them and economists who can identify business opportunities.

Because Jagdish focuses on jati, not varna, his organization is full of resentment. Many of his managers are terrible at managing and this amuses and annoys the workers, especially those who are better suited to manage and lead. There is conflict between management and workers. Jagdish, like those who support the caste system, feels people should simply do their jobs and not challenge the system and not ask for rights. Only then, he says, will there be order. Unions have been formed in his factory. There is going to be a strike! But Jagdish refuses to see himself as the source of the problem. Like the European Orientalists, he focuses on the visible (birth and color, or institutes) and not the invisible (disposition) to his own detriment.

Jagdish’s company is an organization — rigid and full of jatis. He is unable to create what the Rig Veda called Purusha, an organism, that evolves over time, and responds to the market organically and innovatively, thanks to the disposition of its constituent members.

This article is also listed under Business, Myth Theory