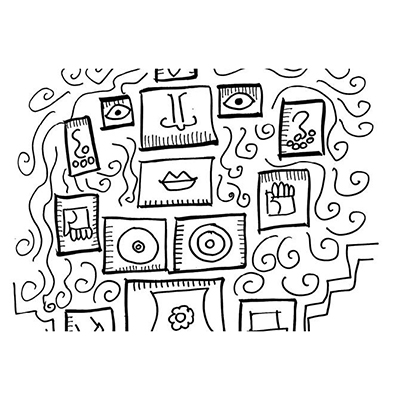 The Buddhists and the Hindus share the idea of the land becoming sacred, when it is connected with the body of a holy being. Let us first hear the Buddhist story.

We are told that when Buddha died, his body was cremated, and after the cremation, his ashes were supposed to go to his birth tribe: the Shakya tribe. However, seven kings of the Gangetic plains attacked the city of Kushinagara, where the cremation took place, demanding a share of the relics. They surrounded the city and threatened a great war, until finally a sage known as Drauna divided Buddha’s relics into about eight caskets and distributed them among the kings, who took it to their respective kingdoms and placed it in sacred mounds. This is how stupas originated. Stupas basically contain the relic of the Buddha, either a piece of a bone or teeth or hair or ash.

We are told that at the time of Ashoka, who lived about 200 years after Buddha, he rediscovered these relics and divided them into 84,000 parts and took them to different parts of the world, across the subcontinent and even Southeast Asia. Thus, even today, in different parts of the world, we find Buddha’s relics being located. At the time of Buddhaghosa, who lived around a thousand years after the Buddha, we hear the idea that a monastery or a vihar becomes powerful depending on which or how many relics it possesses. Across Myanmar, Cambodia, Laos, Thailand, China, Japan, Afghanistan and now even America, we hear stories of the different Buddha relics. The legend has even emerged that many years into the future, the relics will come together and Buddha’s body will reconstitute itself in Bodh Gaya to mark the arrival of the next Buddha, Maitreya.

A similar story is found in Hinduism, but the story was composed much later, one can say roughly 1,000 years after the Buddha story. We are told that Shiva’s wife, Sati, committed suicide in the funeral pyre after her father, Daksha Prajapati, insulted her husband. She could not tolerate the tension between her orthodox father and her heterodox, ascetic-like husband and burnt herself, as she could not reconcile the two ways of thinking. What followed was Shiva’s rage. He beheaded Daksha Prajapati and when his rage subsided, he resurrected Daksh Prajapati and then picked up the charred remains of his beloved wife and wandered the earth, crying.

The sages realised that Shiva’s mourning would destroy the world. In order to restore harmony to the world, they requested Vishnu to cut Sati’s body into tiny pieces, hoping that with Sati’s dead body gone, Shiva’s sanity would return. Accordingly, the body was cut into tiny pieces in different parts, which fell in different parts of India, giving rise to the Shakti pithas, whose numbers vary depending on the text we read: from 51 to 64. So, you have, for example, in Jwalamukhi, in Punjab, her tongue; in Kamakhya, in Assam, her womb; her toe, fingers, navel, breasts, similarly, are in different parts of India.

These are, of course, matters of faith, but one sees the similarity between Buddha’s relics and the different body parts of Shakti, making the land sacred and granting holiness to the land. Were they influenced by each other? That is a matter of speculation.