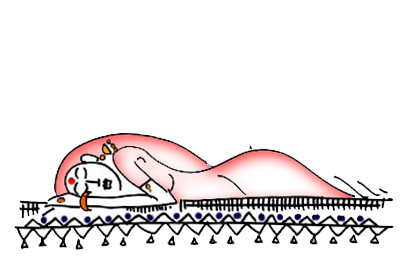 Soon after his birth, Lakshman kept crying until he was placed next to Ram. Since that day he was always beside Ram, accompanying him to protect Vishwamitra’s yagna and following him into exile in the forest. Such was his devotion that he refused to take his wife along with him to the forest. He even refused to sleep for 14 years so that he could serve his brother day and night.

Lakshman’s wife, Urmila, wanted to follow her husband to the forest as Sita had followed Ram but Lakshman begged her to stay back saying, “I will be busy taking care of Ram and Sita and will have not time for you. Help me by staying back so that I do not have to feel guilty or anxious about your wellbeing.” So Urmila stayed back, reluctantly, wondering how she could help her husband help Ram.

On the first night in the forest, Lakshman kept watch while Ram and Sita went to sleep. That is when Nidra, the goddess of sleep, approached him. He begged the goddess to leave him alone for fourteen years so that he could guard his brother and sister-in-law night and day. The goddess, impressed by his act of filial devotion, agreed. But the law of nature demanded that someone bear the burden of Lakshman’s share of sleep. “Go to my wife, Urmila, and inform her of the situation,” said Lakshman. Nidra went to Urmila. Urmila bowed her head and replied, “Give me my husband’s share of sleep for fourteen years so that he can stay awake all that time without any fatigue.” So it came to pass that Urmila slept for fourteen years night and day while her husband stayed awake in the service of Ram and Sita.

This had an impact in the war against Ravana. Ravana’s mighty son, Meghnadh, was invincible. Only a man who had not slept for 14 years could defeat him. Thus Lakshman was able to kill him, all thanks to Urmila.

The story of Urmila comes from folk Ramayanas or Ram-kathas and is not part of Valmiki’s Sanskrit narrative or Tulsi’s Avadhi narrative. But the way the story is presented, especially in the Ram Kathas of South India, is even more interesting. It reminds us how vast and imaginative and provocative the tradition of Ramayana is in India, and how we are often deprived of this variety in our quest for uniformity.

After Ram defeats Ravan, rescues Sita and returns to Ayodhya, the day of Ram’s coronation dawns. As the hymns were being chanted and the crown is brought before Ram, Lakshman started to laugh, startling everyone.

Everyone wondered why was Lakshman laughing: who was he mocking? Every person in the court — Ram and Sita included — was consumed by doubts and guilt, for each was embarrassed of some misdeed in their life. Each one remembered an event in their life, which they were not particularly proud of, and felt Lakshman was laughing at them.

Finally someone asked Lakshman why he was laughing and he replied, “I have waited for this moment for the past 14 years and just when I am about to witness Ram being crowned king, the goddess of sleep, Nidra, reminds me of our agreement 14 years ago, and demands that I submit to her this very moment, and go to sleep and let Urmila awaken. I find the irony of the situation hilarious.” So Lakshman dozed and Urmila woke up to see Ram crowned king, and everyone heaved a sigh of relief.