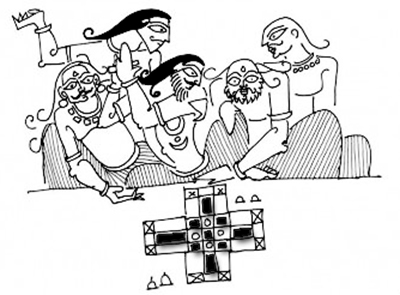 There has been a lot of talk about innovation in the corporates during the last 5-7 years. We have even heard about the Indian Jugaad mentality as a way of innovation. I was just wondering if Indian mythology has any such concept of “innovation”.

Since ancient times, Indians have always believed that nothing in this world is static. Everything is changing constantly. Even Indra, king of the devas, is not sure how long will he enjoy Swarga; the war-mongering asuras are always at the gates of paradise. Nothing is certain. Everything can and will change. It is an accepted reality.

By contrast, the West believes in a stable world order — a Promised Land, a Mount Olympus, where things are stable. There is talk of periodic dramatic disruptions — the revolution! But these happen after long periods of stability. Change represents a change of guard — for example from colonial powers of the 19th century to post-colonial republics of the 20th century.

The West functions on the basis of dependable systems. A logistics firm in the USA takes it for granted that the maps are correct, the roadways are organized, the signaling systems work, the octroi collection rules are respected. But an Indian logistics firm has to function taking nothing for granted: there is no guarantee that the maps are correct, the roads are being repaired, the signals are working, the octroi is being collected as per rules. There are so many variables that the only way to survive in India is to depend on the ‘improvization’ or jugaad mindset of the truck driver. Else everything will collapse.

If there is an emergency in the USA, you dial 911. Notice how even we Indians know this number thanks to Hollywood films. But what number will we dial if there is an emergency in India? There is no single number that we have. In all probability, we will call our families. In the most developed countries of the world, there is a single number that determines your identity — a social security number. In India, even the government is not sure what is that single document that determines the identity of the Indian citizen: is it the passport, the PAN, the electoral card or UID/Adhaar? The West creates a dependable cushion continuously improved by innovation. In India, we need to have a jugaad mindset as there is no system that will take care of you when you fall.

In the Bible everyone is walking towards the Promised Land: a common goal. In Greek mythologies, the talented individual is encouraged to break free from the monotony that binds the masses. Innovation comes from this Western mindset that seeks the individual to rise up (like the Greek hero) and help the collective (like the biblical prophet).

In Hindu, Buddhist and Jain Purans, everyone is walking in different directions depending on his karmic burden. Improvisation comes from the Indian mindset that helps one survive in a world where nothing is constant and one is ultimately on one’s own, with no support from anyone. It is not about changing the world and making it a better place; it is about surviving and thriving in a world that keeps changing whether you like it to or not.