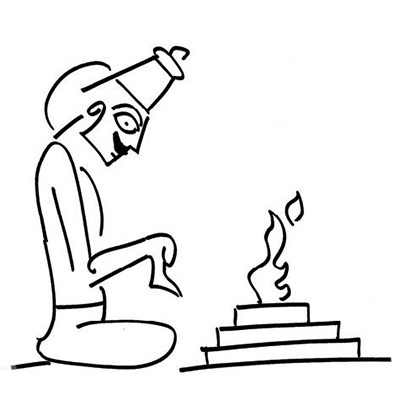 The Brahmana, orally transmitted by priests who came to be known as Brahmins, contain instructions and explanations for the Vedic ritual of yagya. All the four Vedic Samhitas have Brahmanas attached to them. The Brahmana associated with Yajurveda is called Taittiriya Brahmana. Here, we find stories related with Indra, which are not commonly told. They explain how kingship was seen in Vedic times, over 3,000 years ago, very different from how kingship came to be seen in Puranic times, in the past 2,000 years, by which time Indra had lost his exalted status and was seen as an insecure god, and inferior to Vishnu.

We are told that Prajapati creates the devas and Indra is the youngest deva. He appoints Indra as king, but since he is youngest, his rule is not accepted by his elder brothers. So, he goes back to Prajapati and asks Prajapati to give him his lustre. Prajapati passes on his lustre to Indra. As a result, Indra becomes more powerful than his brothers and they accept his right to rule over them. Prajapati, now lustreless, is eclipsed by Indra. Lustre here is a metaphor for power. Power is more important than seniority to make a king.

The third story tells us about the battle of Indra with his arch-enemy Vritra, the first of the asuras. Though Indra kills Vritra, he is unsure of whether he is really dead. So, he sends the Marut to confirm Vritra’s death. The Marut go to the battlefield and dance on the body of Vritra. Vritra does not move and that confirms he is dead. This dancing on the dead bodies on asuras turned Marut into the first dancers.

In another story, the asuras perform a yagya, to reach paradise (swarga). Indra approaches them, disguised as a Brahmin, and asks to participate in the yagya. Each asura and Indra create a brick that is used to make the great fire altar. As the yagya is reaching its climax, Indra removes his brick, causing the great altar to collapse. As a result, the asuras turn into spiders, vomiting sticky substances. Only two asuras manage to reach swarga, but in the form of celestial dogs.

Finally, there is the story of how Indra lies to the asuras that he will not kill them, but ends up killing them as they sleep. Since he used falsehood to win the war, he performs a ritual of purification and after removing the falsehood, returns to swarga.

All these stories show an understanding of Vedic rituals, which were created to cleanse ambitious, young kings of their dark deeds. As per legend, the sage known as Yajnavalkya rejected such rituals, as they enabled and condoned unethical acts. This angered his guru, who asked Yajnavalkya to vomit out all he had learned. This vomit was consumed by other students, who took the form of partridges, or the Tittiri bird. Therefore, the knowledge that was regurgitated came to be known as Taittiriya Brahmana.