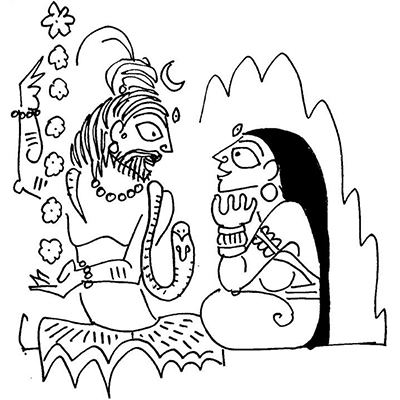 The idea of guru being greater than mother, father, even God, is an idea that emerges from medieval times and is articulated in the “Guru Gita”, a conversation between Shiva and Shakti from the Skanda Purana. This chant is very popular today but was not popular in Vedic times, when the guru was essentially acharya (teacher) who was paid fees (dakshina) for his services.

The idea of the charismatic guru, chased by fans and followers, starts with Buddha whose students submitted (sharanam) to him and followed him, until the day he died. This idea recurs in Vajrayana Buddhism and Tantric Buddhism of Nepal and Tibet, where the gurus like 84 Mahasiddhas are admired and worshipped. It is also found in the Nath Yogi traditions where Gorakhnath is completely committed to his master Machindranath. In Islam, everyone is beholden to the Final Messenger, Muhammad Paigamba. In Shia traditions, everyone follows Muhammad’s descendants, the Imam. In folk Islam we find similar adoration of Ghazis and Pir. Here, the chela follows the ustad, very much as the shishya follows the guruji for the rest of his life. He is completely beholden to the guru who has complete power. In Sikhism too, the guru is all supreme and the final guru is a book-the Granth Sahib. Still, the new gurus, who establish deras, have vast number of followers, who do whatever the guru says. There is submission, not autonomy.

However, the Bhagvad Purana talks of the guru of gurus, Dattatreya, who is autonomous. He learns from various plants, animals, elements, human and gods and transmits this knowledge to students. He is no leader who needs followers. Those who follow him are dogs and cows, dogs who need a master, and cows who need protector. Does Dattatreya need the dogs or cows? No, he does not. He has no hunger, so needs no cows. He has no fear, and so needs no dogs. The cows and dogs need him. These are clearly metaphors for those who need an alpha in their life, a protector, a caretaker. But, when autonomous, they rise above their dog-like or cow-like instincts.

Shiva, the guru of the rishis, is Mahadeva, because, unlike the devas, he does not seek to be fed with Soma during a yagna. He is digambara, naked, because he is attached to nothing, neither followers, nor students, nor friends nor family. Ghosts (bhoot-pret) are metaphors for the hungry souls who follow him; they need Shiva, Shiva does not need them. Shiva enables their liberation from the cycle of existence. He does not bind them like gurus today bind students to themselves, entrapping them with love and devotion. Hence, Shiva’s symbol is the ash-the residue of burning all bonds.