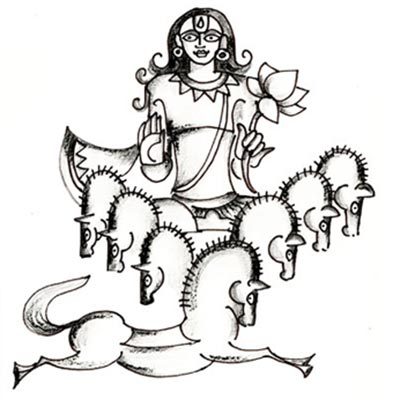 By Devdutt Pattanaik
02nd May, 2015
The Speaking Tree

In Roman times, Sunday was the first day of the week – an important day named after the Sun-God. Helios or Hyperion was the Greco-Roman Sun-God, who later merged with another Greek god, Apollo, the youthful, energetic, beautiful god who shot arrows that got rid of the darkness. When the Roman Empire became Christian, the day of the Sun became Dominica, the Day of the Lord, the day when – according to Christians – God rested after creating the world in six days.

Unlike the months of the year, weekdays have no astronomical correlations. It is an arbitrary division of time, believed to have its origin in Babylon from where it spread eastwards to India and thence to China and westwards through Rome to around the Mediterranean. Just as Romans attributed the first day of the week to the Sun, so did Indians who called it Ravi-vaar. Why was the first day of the week associated with the Sun, no one knows. It is one of those mysteries of history that remain unresolved. The earliest reference to Sunday in India comes from texts dated after 400 CE, and it is believed to have come with Sun-worshippers like the Huns, Parthians and Scythians, who entered India around the time of the Gupta kings.

Surya is an important god in Hinduism. He is the chief graha or celestial body around which revolve all the astrological grahas. He is the Supreme Father whose chariot is made up of 12 wheels, each wheels corresponding to the seasons, and which is pulled by seven horses. They say that while six horses are seen, the seventh horse is unseen. It is the mysterious horse of intuitive wisdom whose presence is felt but which remains invisible. Surya’s charioteer is Aruni, the god who is incomplete, of ambiguous gender, because his mother, in her impatience, broke the egg before he was fully ready to be hatched. Aruni shoots arrows that pierce the night sky, which is why dawn is so blood red.

Surya’s wife is called Saranya or Sanjana who gave her husband a pair of twins: Yama, the first man to die and hence the god of death, and Yami, who turned into the river, Yamuna, and to the night, Yamini, mourning for her brother. Unable to bear her husband’s radiance, Saranya ran away leaving behind her shadow-twin, Chaya. Chaya gave birth to Shani, the lord of Saturn, god who delays things. Surya realised that Chaya was a duplicate wife when he noticed that she did not love Yama the way she loved Shani. So he went looking for his true wife and courted her as a horse when he learnt that she had turned into a mare. From this equine union came the horse-headed twins, Ashwins, lords of the morning and evening star, who bring health and healing wherever they go. Scriptures refer to another son of the Sun, Revanta, the lord of the hunt, shown in art riding horses. Thus, horses are closely associated with the Sun-God.

In Vedic times, men did not ride horses; horses were used only to pull chariots. Horse-riding as a technique came into India much later from central Asia. Perhaps, the horse-riders were also Sun-worshippers, and so Surya, who rides a chariot pulled by seven horses, came to have a son who rides a horse and shoots arrows much like the Parthians and Scythians of central Asia. These tribes, as also the Huns, are said to be ancestors of the Rajput clan, which explains why Rajputs loved horses and claimed descent from the Sun-God. Surya is also the father of Manu, the first human king. One is not sure who his mother is; some say it is Saranya, others say it is Chaya.

Either way, from the Sun, through Manu, comes the most illustrious dynasty of kings, the Ikshvaku, to which Rama of Ayodhya belonged. Aditya is one of the names of the Sun and Vikramaditya, or the solar conqueror, is the name of India’s greatest king of legend, the one who could solve any problem like Solomon in the Bible.

Besides being a warrior, folklore has it that the Sun was a bit of a rake. There is the sunflower who gazes at him adoringly at all times. There is the lotus, which blooms as soon as he arrives in the sky. And there is the raat-ki-rani, the queen of the night, whose heart the Sun-God broke, so she blooms only at night refusing to release her fragrance in the presence of the Sun.

In ancient India, a chaste woman was called a-surya-sparsha, one who was touched not even by the Sun. Sun was the ultimate symbol of virility; hence, women of noble families were expected never to come out into the Sun, unless protected from the Sun’s lustful gaze by a parasol or a veil.

This article is also listed under Ramayana, World Mythology