Dogs of the gods 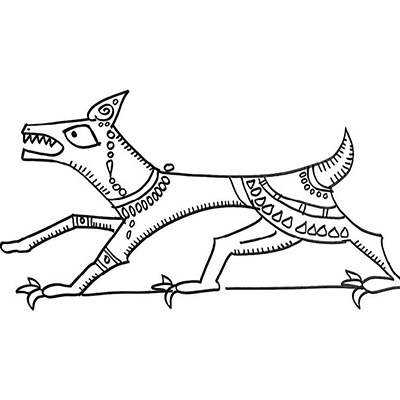 In traditional Hindu society, dogs are considered inauspicious. This is most evident in dharma shastras, which were put together about 2,000 years ago. Dogs were associated with death, as well as with pollution and, therefore, belonged to the periphery of society. Dog-eater was a common way of describing the Chandala community, who also lived on the periphery of villages and in crematoriums, and were seen as polluting by the rest of the village.

In all cultures, certain animals are given high status and low status. In Christianity, for example, the serpent is associated with the devil. In the Islamic world, greater value is given to the cat over the dog as Prophet Muhammad had a pet cat. This reveals how different meanings are given to different creatures in different cultures.

The earliest mention of the dog is in the Rigveda. In the Rigveda, we hear of a bitch called Sarama, who belongs to Indra, and helps in seeking out the cows of Indra, stolen by the Panis. So, one can consider Sarama as a hunting dog or a watchdog of Indra. Sarama’s children came to be called the Sarameya, and all the dogs in the world are considered to have descended from her. Specifically, the Rigveda mentions Shama and Shabala, the two children of Sarama, who are four-eyed animals, constantly associated with Yamaraj.

Because the dog is associated with death, we see it also associated with Bhairava, Shiva’s fierce form, who is called the guardian or protector of Kashi. As the kotwal of Kashi, he is seen riding dogs, again a reference to the dog being a watchdog, who stands at the periphery, protecting the inner world from external dangers.

In the Atharvaveda, Rudra is the lord of dogs. Shiva, it must be understood, was in that period also considered an outcast god. He is feared and kept at a distance, until he transforms into the auspicious Shiva of Puranas.

In one story, found in the Puranas, during times of starvation, Vishwamitra found no food and, in desperation, stole dog meat from the Chandalas and started to cook it. Horrified that the great sage was going to eat dog meat, Indra brought rains and the drought came to an end. In another story, we hear how Vishwamitra curses Vasishtha that his children for several generations would be born as dogs.

In much later literature, we find the fierce dogs of Bhairava transforming into four gentle puppies, embodying the Vedas who accompany Dattatreya. Dattatreya, the first guru of the Nath Jogis, challenged the old Vedic orthodoxy that considered the dog inauspicious.