Dharma in the forest 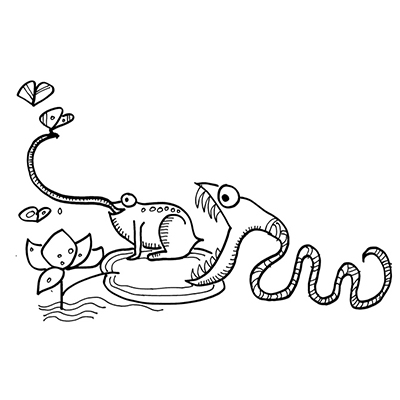 In the beginning was the forest. Humans domesticated the forest to create culture, a space where they could feel secure. However, as societies around the world are becoming unsafe for immigrants, travellers, minorities, women and queer people, it is time to ask ourselves what is culture? Are we humans, or just domesticated animals of the powerful, or are we alphas establishing a pecking order, or predators seeking prey?

In the forest, there are no rules, no duties, no obligations. Everyone is driven by instinct. The strong, the smart and the nimble survive. The unfit perish. No one comes to anyone’s help. This is the space of ‘fish justice’ i.e. matsya nyaya, where the big fish eat the small fish, and that is okay. Society, however, is where the mighty have to take care of the meek. Resources have to be made available for the unfit, and the weak. This is dharma for humans. When humans behave like animals, it is adharma. Animals are supposed to behave like animals, as they are hardwired to do so, but humans have a choice. In this choice is embedded the idea of dharma. The more human we are, the more we care for others, the more we walk on the path of dharma that takes us towards the divine.

The forest (vana, aranya) is an important backdrop in both Ramayana and Mahabharata, because both deal with the issue of dharma.

In the Mahabharata, the Pandavas encounter the forest six times. First, they are born in the forest. Second, they return as refugees, when Kauravas set fire to their house. Third, they return as city-builders, after they secure the forest of Khandava as inheritance, and build on it the city of Indraprastha. Fourth, they return as exile, when they gamble away their kingdom. Fifth, as kings, they follow their horses as part of the royal land-claiming yagna. Finally, the return to the forest, a sixth time, as hermits, after passing on the reins of the kingdom to their heir, Parikshit.

Both in the Ramayana and the Mahabharata, we are left to wonder which space is more cruel: the forest or the human settlement. For very often, the people of settlements behave worse than the people of the forest. The whole point of culture is to create a space where the meek are taken care of by the mighty. Yet, this does not always happen. Only when the two great epics are seen in this light do we truly understand the underlying philosophy.