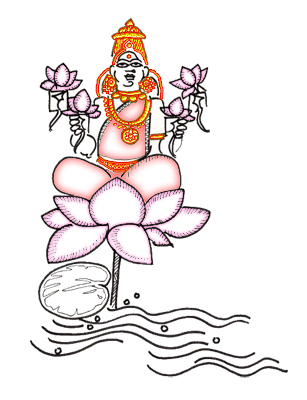 It annoys us to find Lakshmi with people we don’t like, people who we deem to be criminals and sinners. We believe that Lakshmi should abandon amoral and perverse people. But there she is, with them, and we find it exasperating, irritating and so unfair. In mythology, all villains seem to be rich. Ravan lived in the city of gold and Duryodhan lived like a king till the day he died. Contrast this with Ram who had to live, for no fault of his, in the forest for fourteen years and the Pandavas who were born in the forest and had to live in the forest, in abject poverty, for most of their lives. Why is it so? Does Lakshmi like bad people? Or is she just indifferent to the notions of ethics and morals and propriety and virtue that matter so much to us?

Ancient Indian seers spent a lot of time contemplating on the nature of wealth. And they compiled this knowledge through the stories, symbols and rituals of Lakshmi. Laskhmi embodies the principles of artha, economic and political activity. She is one of the four goals of life, said the seers, the other three goals being: dharma, social order; kama, pleasurable pursuits; and moksha, spiritual practice.

Some scriptures say that Lakshmi follows Vishnu who is the upholder of dharma and her son is Kamadeva, the god of pleasure. Is that wishful thinking? After all, Lakshmi is often seen in the company of Vishnu’s enemies — the demonic Asuras whose city located under the earth was called Hiranyapura, the city of gold, that precious metal so closely associated with Lakshmi. And everyone knows that Lakshmi’s arrival need not always be pleasurable. Her arrival is followed by quarrels and strife. So what is this mystery?

Children’s books often translate the word Asura as demons. And the word demon has a moral judgment. But this moral judgment is missing in Indian literature. Asuras are the children of Brahma, just like Devas. The two sets of beings have different mothers. Diti is the mother of Asuras and Aditi is the mother of Devas. The former live under the ground and the latter live above the ground. The former create wealth while the latter yank her out. This makes Lakshmi, Asura-putri (daughter of Asuras) and Deva-patni (wife of the Devas). Indra’s consort, Sachi, is a form of Lakshmi.

Equating Asuras with demons is a legacy of early European scholars, blindly adopted by later Indian academicians. Since Asuras were enemies of Devas, and since Devas were worshipped and hence considered gods, Asuras became demons, a natural conclusion for people who were obsessed with force fitting everything into the binary framework of good and evil.

The reason why Devas were worshipped was not moral, it was material; they released wealth and made it available to all — they released rain from clouds, trees from seeds, water from earth, metals from rocks. Asuras were not worshiped because they hoarded wealth, locked it away from humans. They had to be killed if Lakshmi had to be released.  The sun-god’s sunlight, wind-god’s air and the rain-god’s water makes the plants come out. The fire-god’s heat released metal from rocks.  Without violence, wealth could not be secured: the field has to be ploughed, crops had to be cut, grains had to be threshed, rocks had to be broken and smelted….in other words, ‘war’ had to be declared on Asuras and their daughter had to be taken forcibly.

Indra and the Devas live a life of luxury surrounded by wine and women and music and dance. Indra is very blessed. Unlike humans who have to work for a living he can get anything he desires by simply wishing for it for in his realm, Amravati, exists the wish-fulfilling tree, Kalpataru,  wish-fulfilling cow, Kamadhenu,  and wish-fulfilling gem, Chintamani, and even the elixir of immortality, Amrita. That is why Indra’s abode is called Swarga or paradise. Still Indra is extremely insecure. He fears he will lose his wealth. For unlike Asuras, he does not know how to create wealth; he can only procure and distribute wealth. A sage’s curse can cause Lakshmi to leave his side in an instant. And this invariably happens, no thanks to the megalomania stirred by wealth.

Once again Indra leads the Devas to fight and kill the Asuras and get Lakshmi back. The Asuras can keep creating Lakshmi because they are blessed with something the gods do not possess — Sanjivani Vidya, the secret of regeneration. This can bring the dead back to life, in other words make the barren land fertile. This is a gift obtained for the Asuras by their guru, Shukra, a devotee of Shiva. So the Asuras keep generating wealth and the Devas keep snatching wealth away from them. Which is why every where during harvest times we narrate stories of demons being killed — in Dassera Mahish-Asura is killed by Durga; in Diwali, Narak-Asura is killed by Krishna and in Onam, Bali-Asura is killed by Vaman.

The battle of Devas and Asuras is the battle between spenders and hoarders, distributors and creators. It begins with defeat of Devas and the loss of Lakshmi and ends with victory of Devas and return of Lakshmi. That it is never-ending indicates it is not a battle of good over evil. It is a fertility cycle.

The funny thing is, neither the Devas nor the Asuras are happy. They try hard to hold on Lakshmi but she slips away. In folk tradition Lakshmi is described as being squint — one never knows where she is actually going. She is also called Chanchala, the whimsical one, eternally restless. They say one should never keep the image of Lakshmi standing in the house; she will get tired and run away. One is advised to keep images of Lakshmi comfortably seated, preferably next to Saraswati, goddess of knowledge.

While Lakshmi brings prosperity into a household, Saraswati brings peace. The two goddesses are described as quarrelling sisters. Lakshmi loves to go places where Saraswati resides. But her arrival marks the end of wisdom and peace. With wealth comes quarrels, bickering over money-matters, annoying Saraswati who runs away, which is why they say prosperity and peace rarely coexist. The only god who can bring them together is Ganesha. In some scriptures, he is described as their brother. In others, Lakshmi and Saraswati are forms of Riddhi and Siddhi, wives of Ganesha.

Typically everyone chases Lakshmi. As for Lakshmi, she is drawn to only one god, Vishnu, who is not a Deva, but greater than all Devas, who is actually God (spelt with an upper case) or Bhagavan. Vishnu is the only one who got the Devas and Asuras to cooperate and serve as the force and counterforce of a churn that got Lakshmi and other magical treasures to rise from the ocean of milk.

Vishnu is typically shown siding with the Devas. He offers Amrita, nectar of immortality only to the Devas and he fights alongside them in the battles against Asuras. This seems unfair until one steps back and observes Vishnu’s role as preserver.

Brahma, as creator of both Devas and Asuras sides with both of them equally. Shiva as destroyer is indifferent to both Devas and Asuras and will give both of them equal power. This equality does not result in movement or dynamism; it produces a stagnant destructive statement. Vishnu creates an imbalance that causes the forces of the cosmos to flow, for day to follow night, summer to follow winter. He balances the Sanjivani Vidya given to Asuras by Shiva with Amrita which is reserved only for the Devas. So while one group can regenerate themselves after being killed, the other group is immortal. One groups keeps dying and being reborn while the other group stays alive forever. When the Asuras are killed, the Devas win and Lakshmi is with them. When the Asuras are brought back to life by Shukra, the Devas lose and Lakshmi is back with her fathers.

While Indra seeks Lakshmi for himself, Vishnu does not. Vishnu seeks to create order  in the cosmos by the rhythm of nature and order in society by rules and regulations. The story goes that when the earth complained that the kings of the earth were plundering her wealth in greed, Vishnu promised her to take care of her by instituting the code of civilized conduct known as dharma. The earth turned into a cow and Vishnu became her cowherd and caretaker, Gopala. He protected her with dharma and she, in exchange, gave artha and kama.

Dharma is all about balance — taking only as much as one needs, and sharing the excess. Parashurama kills Kartaviryarjuna who steals the cows which are given as gifts to sages. Ram kills Ravan who disregards the laws of marriage. Krishna kills the Kauravas who are unable to share wealth with their own family. This makes Vishnu a deity intent on making the world a better place. Perhaps that is why Lakshmi sits coyly at his feet. He is Shrinivas, the eternal abode of Lakshmi.