Brooms are for Sweeping 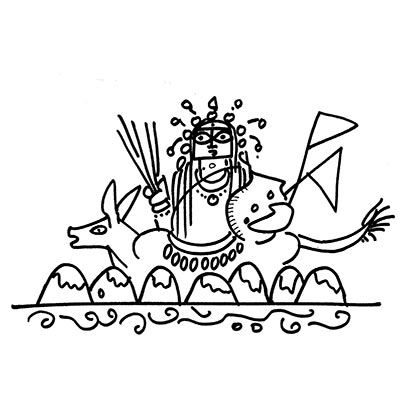 Every time I see politicians waving brooms, I shudder. Brooms are for sweeping away dirt. Waving them in the air only spreads the dirt. But then, who cares about these details anymore.

As a symbol, broom reveals some very interesting aspects of culture, both in India and in the West.

The goddess who waves the broom or jhaadoo is called Shitala, the cool one, associated with various skin ailments like pox and measles. Often visualised as carrying a pot or basket in the other hand and riding an ass or donkey, she is appeased with offerings of curd and neem leaves whenever there is an epidemic. Shitala causes the disease when angry and takes the disease away when calmed down. Thus she is both: Jari-Mari (the hot one from the words jvara meaning fever and maru meaning desert) and Shitala (the cool one).

In India, the jhaadoo is also used for jhaadna, which is not just physical dusting but aura dusting, the removal of ‘nazar’ or other negative influences on ‘non-physical’ body. This a occult belief, widely prevalent in India, not endorsed by scientists though. Mothers usually insist on jhaadna for their children. The broom used for this is often made using peacock feathers which has an ‘auspicious’ eye-like pattern. Broom made of horse-tail or yak-tail are also used for this purpose.

The yak-tail flywhisk or chamar is a kind of broom meant to sweep away the flies. But it is also symbolic of royal authority. The morchha, or broom made of peacock feathers is reserved for the vizier. That is why Ram, who is king, is associated with chamar while Krishna, who is not a king, is usually associated with morchha. Amongst Sikhs, the king of Punjab did not use the chamar and restricted its use only for the holy book, the Granth Saheb, signifying he is but a servant of God.

In the West, the broom is associated with witches from the 16th century onwards. She is visualised as a hag who flies through the air on her broom. These brooms were long sticks with faggots (bundles of sticks or grass) attached to one end. Some people believe that in medieval times housewives, while sweeping the floor of their houses, often rode astride on the broomstick to give themselves sexual pleasure; when caught, they were branded as witches. Over time, women who were dependent on their families came to be known as faggots, a pejorative term used to associate them with that which is needed to clean the house. It also perhaps referred to old women who made their living by collecting firewood and tying them into faggots.

Faggots or fag became slang in boarding schools for juniors who were expected to serve seniors like cleaning ladies and maids as part of college ragging ritual. In the 20th century, the word fag gradually came to be associated with effeminate men and now is a word used for gay men in the English-speaking world.

Witches of the West used the faggot of their broom to wipe away their traces after they had flown in the skies. In India, many Dalit communities were asked to carry brooms with them to wipe away their footprint when they walked on the road. It is one of the horrifying ironies of human history that people who wielded the broom to clean the streets of villages were themselves declared unclean and ‘untouchables’.