Back to old values of love 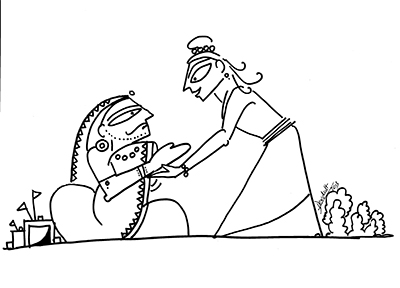 Five years ago, on December 11, 2013 – my birthday – I was awaiting happy news that the Supreme Court would endorse that homosexual activity be decriminalised, upholding the judgment of the Delhi High Court. Unfortunately, I got the worst gift of my life. The SC, in a surprisingly immature and shocking order, struck down the Delhi HC judgment.

For the first time in my life, I think, I felt my heart break, and I felt loss of faith in the country. I couldn’t believe that this had happened; that I had been reduced to a miniscule minority undeserving of human rights.

Divinity lies in diversity.
As a person who writes on Hindu mythology, I have always been wonderstruck by the maturity and wisdom of ancient India, where divinity was associated with acceptance of all things diverse and wonderful. I had learnt over the years, that high spiritual index indicates the ability to handle difference, and low spirituality index is an indicator of inability to handle difference and the desire to homogenise the world, to deny the world its diversity. And, when I suddenly saw the SC moving in this very negative direction, all hope was lost.

This was five years ago. But now, the world has changed. Yesterday, on September 6, 2018, it was my elder sister’s birthday, and she got a wonderful gift. She received a gift telling her that her brother was no longer criminal, and that the Supreme Court of India believes that gay people, lesbians, bisexuals, transsexuals, deserve human rights and constitutional rights as much as any other Indian citizen. I couldn’t believe it. It took five long years for the SC to rectify the damage done by the earlier judgment. I’m so glad that my faith in the country is restored, and that India has aligned itself with its traditional values of acceptance and love, which is what really creates a noble society.

In the thick of it all.
I happened to be in Delhi for some personal work, and when I heard that the judgment was to be delivered on September 6, I contacted [lawyer] Menaka Guruswamy and Keshav Suri [petitioner], who were leading the charge. I asked if I could join them in court, and they said, “Of course, every Indian citizen has the right.”
It was my first time at the SC, and I was so excited. Here I was, at the greatest institution of our country, waiting with bated breath at 11.30 am outside the crowded hall. It was too crowded; we had to wait in the courtyard. But then the news came that the judges had created history, that human dignity had been restored for the LGBT community. We heard about how the judgment was unprecedented.

We do not realise how much this judgment means, not just to India, but to the entire Commonwealth and the world. Many people in countries like Singapore and in African nations look at India as a place of wisdom, and they were all disheartened with the 2013 judgment. The 2018 judgment has restored their faith in not only the Indian judiciary, but also their faith that Indian wisdom is truly at a different level and can help shape the human discourse in different ways. Everything doesn’t have to come from the West; India, too, has to contribute. This is a moment in history.

Rama welcomed all.
In mythology, it is said that when Rama was returning to Ayodhya from his forest exile, he noticed that the kinnaras, or queer people, were waiting outside the city. He wondered why they were not inside the city. They told Rama that he had told the men and women to return to the city, but had forgotten them, who were neither male nor female. Ram told them, “How can there be Rama rajya (Rama’s realm) without you, because Rama rajya is completely inclusive.”

The story is a folk tale, but it reveals this idea that India’s greatness lies in inclusion and, therefore, we have so much diversity. Most countries in the world prefer homogeneity and can’t handle diversity. What makes India special is that despite all its problems, with all its poverty, it embraces diversity. Now, with this [judgment], the ‘inconvenient’ sexual minorities have been included, at least legally. That legal hurdle to our heart is now taken away. The gay people will no longer be ‘unconvicted felons’, to quote lawyer Menaka Guruswamy.

I’m so grateful to the SC for changing the world. It will have an impact not just on many lives across India, but on many families in the Commonwealth.

This article is also listed under Indian Mythology, Queer, Ramayana