As you sow, so you may not reap 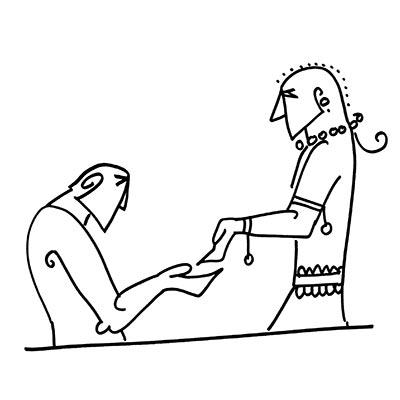 Hinduism does not have the concept of Judgment Day, which is also known as Qayamat in Islam. Islam and other Abrahamic faiths such as Judaism and Christianity emerged in the Near and Middle East. They are based on a god who creates the world and puts together commandments by which human beings are supposed to live their life. Hence they possess concepts of right and wrong, halal and haram. At the end of life, everybody must stand in front of God. He then holds judgment and decides whether one has followed the laws he put forth.

Laws that are communicated through his messengers, the Prophets. Those, who have lived by the law, go to heaven and those, who do not live by the law, go to hell. This mythology has a profound impact on global civilisation, as most nation-states today function using the mythic structure of the Abrahamic Mythology, where the nationstate functions as a god. The nation-states’ Constitution functions as a Commandment. Its various pillars, such as the legislative, judiciary, army and media are continuously monitoring the people following or breaking the law.
Those who follow the law are rewarded and those who break the law are punished. This is what is assumed will make the world a better place. The idea of Judgment Day was not unique to just Middle Eastern regions. There was the concept of judgment in Greek mythology, too. In this mythology, there was not one judge, but three judges who decided one’s fate. The judgments here were on annoying the gods, or living an ordinary or an extraordinary life. If one was guilty of annoying a god, one was sent to Tartarus.

If one lived an ordinary life, one was sent to the Asphodel fields, and if one lived an extraordinary life, one went to Elysium. The Egyptians too had a concept of Judgment Day, where after death the heart of the dead was measured against the feather of righteousness. Depending on the results of the weighing scales, one was either stripped of one’s body completely, or sent to the afterlife, where one could live a life of luxury, based on the funeral goods that were buried along with one’s mummified body.

Thus we find the idea of judgment prevalent across ancient Egypt, ancient Greece, the Middle Eastern countries and, also, Persia, where the Zoroastrian concept of god and judgment played a very important role. Somewhere along the line, we have forgotten that this mythic structure is not a global structure. Not every culture in the world was based on the idea of Judgment Day. In the Indian subcontinent, Hindus do not have the concept of God as Judge. There is no concept of either Qayamat, or Judgment Day.

Mainly because in the Indian subcontinent, people believed in rebirth. Therefore, here, God or divinity functions more as an accountant who maintains a record of deeds based on which future lives are decided. Our life continuously becomes a part of a balance sheet. Amongst Hindus, the concept of debt plays a very important role. Our entire life is about repaying debt’s incurred in previous lifetimes and avoiding a generation of new debts.

Debts entrap us in the material world. When we have paid off all our debts, we are truly liberated from the material world and attain liberation. Liberation, thus, turns out to be a very different concept. We live in a world where, everywhere, everything is being judged; therefore, even in the management world, the appraisal system is based on judgment. We are more concerned about right and wrong than seeing things in terms of consequences. The Indian way of thinking looks at the world as a set of consequences. Every action has a consequence, there is no action which is good or bad.

Every action has consequences which may be good or bad. Good actions can have bad consequences, bad actions can have good consequences. This makes the world a highly uncertain place and it lacks the certainty of the right-wrong model. It is a different model that shaped India for centuries and this is the model that gave rise to Indian civilisation where everybody was made aware of all actions. This is why Krishna tells Arjun that while he has complete control over his actions, he has no control over the result. The fruits of action are not in his control. Unlike the Biblical structure where, ‘as you sow, so you reap’, in the Hindu structure, you are told ‘not to worry about the fruits of action’ because there is no guarantee of any particular result. This is a very different world view that needs to be explored, both in political, as well as management circles.