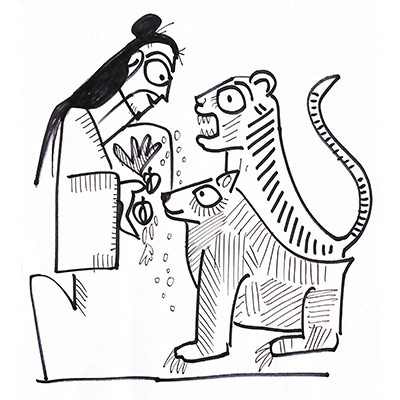 The Korean peninsula is located in Northeast Asia, jutting out into the sea. To its west is China and to its east is Japan. Both China and Japan have sought to lay claim over Korea, but Korea has resisted fiercely. One way it has established its independent identity is through a creation myth that binds all Korean people.

The Koreans believe that the youngest son of the sky-god came to Korea to civilise humans. His other brothers went to China in the east, India in the south and Europe in the west. He came with a retinue of heavenly beings who brought with them all things that civilise humans: agriculture, fishing, herding, weaving, medicine, education. A tiger and a bear met the prince of heaven and asked him to turn them into humans. The prince of heaven told them to eat garlic and some herbs and stay away from the sun for a hundred days. The tiger failed to do this and so remained a tiger. The bear turned into a beautiful woman who bore the prince of heaven a son under a sandalwood tree atop a mountain. This son named Dangun, whose father came from heaven and whose mother was a bear, became the first king of Korea.

While this one common story was popularised to unite the Korean people, every region in Korea, separated by mountains, has its own unique set of stories. As per one story, the earth and the heavens emerged from the body of a single celestial being, the ancestral father. The ancestral mother gave birth to many pairs of twins who became the heavenly people. These heavenly people originally drank earth’s milk and were pure and content, until one day there were so many heavenly people that there was scarcity, forcing some to eat grapes. As a result, they began to grow teeth, and hear sounds of the forest and were unable to hear the voice of heaven. Their skin became coarse and scaly. The various princes of heavens, including the father of the Korean people, came from heaven to help the wild coarse beings rediscover their primal heavenly purity.

As in Chinese mythology, Korean mythology sees perfection in heaven and seeks to replicate it on earth through the directives of divine kings and shamans. It venerates nature and believes the world is full of spirits who can be good or bad. We hear of grim-reapers who collect the soul of the dead, and ghosts of virgins and unmarried men and drowned sailors, and magical and mischievous goblins born when household objects come in contact with blood. There are three-legged crows that serve as guardian spirits, and dragons who bring rain and abundance, and fire-dogs who grab the sun and moon to cause eclipses, and horned lions who provide security and justice, and old nine-tailed vixens who can seduce and kill humans.

There is even a story of an Indian princess from Ayotha who marries a Korean prince. This probably refers to Tamil trading communities in touch with Korean markets in medieval times, but the lore has been claimed by the city of Ayodhya. Such folklore informs and thrives in the delightful K-dramas, which have taken the world by storm for there can be no culture without mythology.