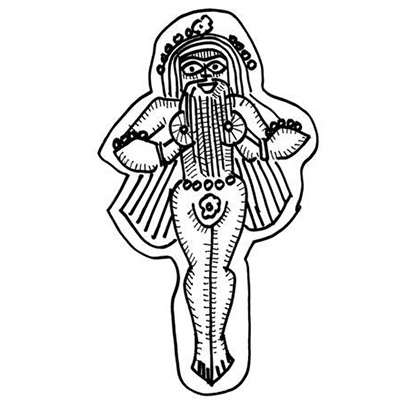 Nearly 4,000 years ago, the land between the rivers Tigris and Euphrates was known as Mesopotamia. It is now called Iraq. This is where some of the world’s most ancient civilisations such as Sumer, Assyria and Babylon thrived. Sumerian, Akkadian or Babylonian society was familiar with queer people—from homosexuals to transgenders to intersex people. From them rose the world’s first queer ‘non-binary’ superhero.

Inanna, the goddess of love, sex and fertility, fell in love with a beautiful man called Dumuzi. He was so beautiful that even her twin sister, the goddess of death, Ereshkigal, fell in love with him. Ereshkigal caused Dumuzi to die an early death and took him to the land of the dead, where he would stay with her forever. Inanna missed Dumuzi so much that she decided to go and search for him in the land of the dead.

Since the goddess of fertility was trapped in the land of the dead, no birth took place, in the land of the living. No male approached the female, no bee went to the flower. Pollination, fertilisation and sex did not take place. Animals stopped reproducing. The natural order was disturbed. The gods told Enki to help release Inanna from the land of the dead. So, he created a queer being known as Asushunamir.

Ereshkigal who fell in love with this queer being suddenly realised that she had been tricked by him/her. But, she could do nothing about it. She was so angry that she cursed the queer being that he would always live in the shadows of the sewers. Nobody would give him respect. However, Ishtar was happy and said that all queer beings would have mystical powers and capabilities, that no male or female would have. He/she would have pride of place in temples as entertainer, guardian, healer and priest. And so, queer people thrived in the temples of the goddess in Mesopotamia and Near East, before puritanical, monotheistic religions came along and wiped out their culture forever.