Why Did Medieval Indian Cavalries Shun the Parthian Shot In Archery? 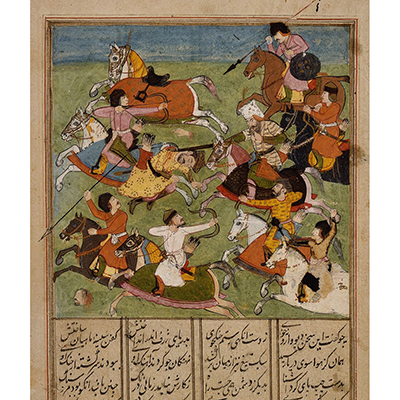 In one retelling of the epic Ramayana, Ram was so righteous that even though he knew Ravana’s weak spot was his navel, he kept shooting arrows at Ravana’s head, in keeping with Kshatriya dharma. Exasperated, Hanuman got his father, the wind god, to send a fierce breeze to push Ram’s arrow and cause it to strike Ravana’s navel. This display of nobility feels right for one who is called the supreme upholder of rules, maryada purushottam. So it feels rather odd that the very same Ram would hide behind a tree and shoot an arrow to kill Vali who was busy fighting his brother, Sugriva. It is a question that still vexes many Indians. And all explanations feel like apologies.

This value placed on direct open frontal assault, rather than ambush and trickery, is at the heart of Kshatriya pride inherited by Rajputs. Chanakya’s recommendations of stealth, strategy, ambush and cunning had few takers in the Rajput world. In Rajput bardic poetry, the one who resorts to trickery is always the villain, the invader, the weak and lazy king, never the hero. The hero always values a fair fight. In Rajput poetry, he openly challenges fellow Rajputs as he claims his bride thus proving his worthiness as groom and son-in-law. He never attacks at night and always waits for the enemy to finish his meal. Greater value is placed on the hero who chooses death over dishonour.

Even if they are defeated and killed in battle, even if they lose kingdoms, Rajput ballads praise heroes who remain fair, righteous, and brave in the face of trickery, and cunningness. Nobility and bravery are valued more than victory. Heroines are glamorised for killing themselves in order to discourage men from being cowards. Heroes continue to fight even after their head has been severed from their body, a motif that finds its way even in later Sikh and Muslim Ghazi warrior literature.

It is most ironic then that in Rajput land is the temple of Krishna who is identified in Dwaraka as Ran-chor-rai, the leader who abandoned the battlefield. A term of derision almost, as Krishna ran away from Mathura, when the city was attacked by Jarasandha. Krishna took refuge in the West, beyond the desert, on an island, from where with the help of the Pandavas, he planned Jarasandha’s death, by trickery.

Krishna is leela purushottam, the one who plays games skilfully and is known for breaking the rules of war. In the Mahabharata, he makes Arjuna strike unarmed foes; he gets Bhima to strike Duryodhana below the navel; and he spreads disinformation to make Drona lose his will to fight. Krishna’s charm and sophistry eclipse his rule-breaking spree. Some argue that Krishna’s behaviour is in line with him being a member of the ‘lunar’ dynasty and so lacking the righteous radiance of the ‘solar’ dynasty of Ram, and Rajputs. Be that as it may, the general Indian is so influenced by Rajput ideals that he disagrees with the popular sentiment that ‘all is fair in war,’ even if the war is for dharma.

The closest that Indian epics and ballads come to a strategy is when Vedic gods, known as devas, find a loophole in their fight against asuras. Vaman, the dwarf, tricks asura king Bali into giving him three paces of land, and then turns into a giant. Mohini distracts asuras while devas consume the nectar of immortality. Thus tricked, asuras keep asking Brahma for boons that enable them to trick death, but the devas find a loophole always. Namuchi asks that he not be killed by anything solid or liquid. Indra kills Namuchi using foam, which is neither solid nor liquid. We can argue this is about outsmarting the opponent, not backstabbing him, as Ram literally does in the killing of Vali.

This brings us to the Parthian shot, an archery trick that played a key role in the Islamo-Turkish conquest of India. Though attributed to Parthians, who lived in Central Asia, it was a trick common amongst horse-riding archers of the Eurasian Steppes, even amongst the Huns, Sassanians, Scythians, Central Asian Turks, and Mongols. The rider would rush towards the enemy then suddenly turn back, creating the illusion of retreat. Then while riding away, twist his body, raise his bow and shoot an arrow at the pursuing enemy that would have let its guard down. The archers would do this again and again, confounding enemies, including the Romans in ancient times, and Byzantine armies during medieval crusades. Indians, more comfortable with aggressive frontal attacks of war elephants, never figured a way to counter the agile trickery of the Parthian horse-riding archers.

The Parthian shot played a key role in the defeat of Prithviraj Chauhan in the second battle of Tarain. Perhaps, to compensate for this loss to the Parthian shot, the Prithviraj Raso was composed by the king’s court poet, Chand Bardai, describing how the Rajput leader, though blinded, finally shot Muhammad Ghori dead using just sound to identify the target (shabda-bhed), a skill valued in Indian archery lore since ancient times.

The Parthian shot perhaps inspired the two-and-side move of the horse in chess too, moving front and then sideways. As per legend, the chess board of 64 squares was invented in India, and travelled to Persia, and Europe, where the form and moves of the game were further elaborated. As the game travelled, the minister (mantri) became the queen, elephant (gaja) became the bishop, the chariot (ratha) became the siege tower or castle, and the horse (ashwa) became the knight.

Was the horse/knight move invented outside India? Indians have known horses since the earliest of times when Aryans brought the beast to India, around the same time that horse-drawn chariots reached Greece, Egypt, Anatolia, Mesopotamia and China. Kings such as Ashwasena and Ashwapati are mentioned in Indian epics. Horses have come into India with Greeks, Scythians, Parthians, Huns, Kushans, and later Turks and Afghans. Across India, terracotta and stuffed horses are given as offerings to folk heroes such as Dharma-Thakur of Bengal, Momaji and Ramdevji of Rajasthan, Aiyanar of Tamil Nadu.

Some of the earliest depictions of saddles come from India, in the Sanchi stupa, for instance. So India was clearly exposed to everything related to horses. But Indian warriors seem to have no knowledge of the Parthian shot, which became popular in the armies of Persia and Central Asia. Perhaps it was actively even shunned. And this may have to do with the idea of ‘retreat’ embedded in this cavalry move, which seemed against the spirit of Kshatriya and Rajput dharma.

While Hindu temples and lore are full of images of horse-drawn chariots and horse-riders, we find no image or mention of the Parthian shot anywhere. One rare exception is the Srisailam temple of the Vijayanagara period (16th Century) where there are images of the Parthian shot. By this time, South Indian kings had been adequately exposed to Turkish warfare. Perhaps the Vijaynagara kings hired Turkish cavalry, or trained non-Rajput warrior clans to adopt this practice. This is not clear. But soon gunpowder would arrive and replace archery altogether on the battlefield.