Were All Hindu Saints Allowed Into Temples? 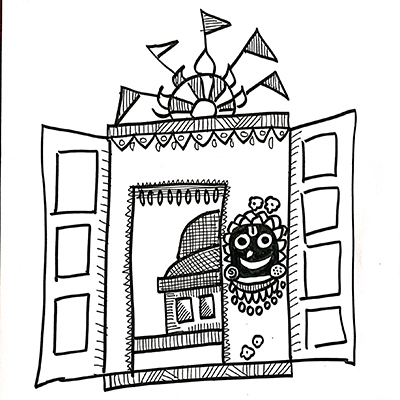 As one climbs the seven hills to get the darshan of Tirupati Balaji, one finds on the floor, a cemented image of a man. It lies prone on the floor, prostrating before the deity. It is said to be Mala Dasari. He was a cobbler who used to provide footwear to Tirupati Balaji, but was never allowed to enter the shrine. Thus, at the point, which he could not cross, he prostrated himself before the lord. The lord would come to meet him there.

In Odisha, in the 18th Century, there is a story of a local Hindu King who had to marry a Muslim princess to prevent her father from attacking and destroying the Jagannath temple. Because he married a Muslim woman, he was not allowed to enter the temple by the temple priests. So, a special shrine was built at the gateway, which is still seen today called Patita Pavana. Even the flag atop Jagannath temple is called the Patita Pavana flag. It is said that those who are not allowed to enter the temple can attain salvation by looking at the flag and the deity at the doorstep.

In the seventh and eighth centuries, in Tamil Nadu, there lived a drummer called Nandanar. He was a great devotee of Shiva, but was not allowed to enter Shiva temples. He would stand far off seeking a glimpse of Shiva. The statue of Nandi, which stands right in front of the sanctum sanctorum, would move a little bit, so that Nandanar could get a glimpse of the lord. There are stories of how he wanted to see Shiva at the Chidambaram temple. For his sake, a special fire was created. As he passed it, his body was ‘purified’ and was given the form of a Brahmin, so that he could see the deity. The story is an old one and suggests that he was not allowed to enter the temple. There are various ways of interpreting the story. Some people say he did not enter the temple because he respected the Brahmanical order. Others say he was burnt alive in his attempt to see Shiva.

These five stories are all related to five temples: Pandharpur, Udupi, Tirupati, Jagannatha Puri, and Chidambaram. They all refer to people not being given access to the sanctum sanctorum. These stories are spread over a 1,000-year history, across the geography of India. They reveal the widespread prevalence of caste orthodoxy, manifested in the access to temples. These rules were finally eased in the 20th Century. Most Hindus are legally allowed to enter most temples now. But non-Hindus, that’s a different matter.

Non-Muslims can enter any mosque but not Mecca. Non-Parsis cannot enter an agiary. Many local temples have rules that restrict access of women and the general public to the inner shrines of the temple. These are no different from visa-restrictions for poor, unskilled economic migrants to most nations around the world. Or club rules that determine who can be a member and who cannot. Harappan cities had no temples, but they had walls to control entry and exit from the city to regulate trade and inventory.

Physical and psychological borders are created to assert power and to establish authority of a few over the many. But nature has no boundaries. Boundaries, walls, gates and windows are created by humans. We may break old boundaries but we will create new boundaries, because we value our privacy and our property. Sacredness is created just like privacy, using a password, accessible to a few.