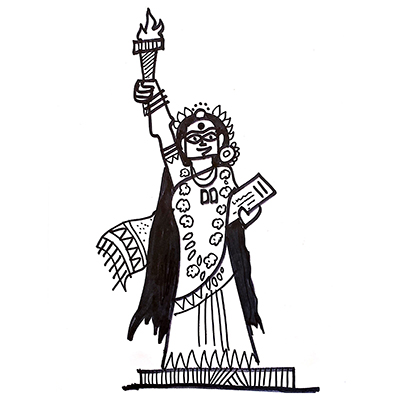 In the 19th-century, Joseph Smith argued that he had found gold plates buried in the Americas. These gold plates, he said, told the secret history of the Christians. That during the Babylonian exile many prophets migrated out of the Holy Land and managed to find their way to America. In America, they created two races. One race forgot the Biblical teachings and became the Native Americans. The second group kept the Biblical teachings and created a great culture, but was unfortunately wiped out by the first group. But, the Prophet Mormon managed to capture this second group’s history and knowledge. He kept it recorded on golden tablets. These tablets were found by Joseph Smith. They gave rise to the Book of Mormon.

Mormon Christianity (officially known as Church of the Latter-Day Saints) thus transforms America into a Holy Land, with its own prophets. It believes that most people have forgotten the true teachings of Jesus Christ. The real teaching is available only with them. Their understanding of Christian theology is extremely different from that of Catholics or Protestants or the Evangelists, of the Old World (Europe). According to them, the Father (Elohim), Son (Jesus), and the Holy Spirit are three distinct deities. Elohim once lived in another planet but then fathered Jesus on earth. Like Jesus, all humans are also essentially celestial beings, who can achieve God-like status, and planets of their own, if they follow the path of Jesus as laid down by the Mormon Church. This transformation is called exaltation.

Mormons are a puritanical group of people. They wear special undergarments, perform very particular rituals, are family oriented, and generally avoid the use of the word Mormon, which has been used historically pejoratively against them. They prefer being called members of the Church of Latter-Day Saints.

If Mormon Christians can turn America into a Holy Land, can Hindus do the same? Can America be what Savarkar called ‘punya-bhoomi’? Savarkar said that Hindus ware those who see India as ‘punya-bhoomi’ and since Christians and Muslims see Jerusalem and Mecca as holy lands, they cannot be considered Hindus. But the idea of holy land shifts over time. Take the case of Arya-desha.

In Hinduism, the word ‘Arya-desha’ is used for the holy land inhabited by noble people, the Aryas, who valued the Vedas. Initially, in Brahmana literature dated to 800 BCE, this region was just the Gangetic plains. In the early Dharma Shastra, dated to 300 BCE, this region expands to include North India, from Himalayas to Vindhyas. By the time of Manusmriti, dated to 200 CE, the region includes all of South Asia, from Himalayas to the Sea. Hindutva argues that ‘Akhanda Bharata’ extends from Afghanistan to Cambodia, wherever Aryas travelled. By that logic, America, where Hindus have migrated can become punya-bhoomi, if a Hindu guru decides to follow the path of Joseph Smith and equate Missouri and Mississippi rivers as Ganga and Yamuna. Or equate the Rocky Mountains with Kailasa.

Brahmins spread the idea of Arya-desha wherever they went. Tamil legends speak of how Agastya took with him mountain peaks from Himalayas as well as water of the Ganga in his water pot, when he travelled south. Many gods travelled with him too. This is why many southern pilgrim spots are called Dakshin-Ganga (southern Ganga), DakshinKashi (southern Kashi) and Dakshin-Kailasa (southern Kailasa). As Brahmins travelled, they discovered swayambhuShiva or self-created Shiva in lands they settled in. These became Jyotir-lingas, or the pillars of light. They sought land grants for themselves (Brahmadeya) and the gods to build and maintain these temples. Thus rose the grand temple-cities of the South. This practice was widespread from 5th century to the 10th Century, as indicated by copper plate inscriptions. In other words, holy lands are created based on migration patterns and political reality. Let us not forget that Rome became seat of God, only 2000 years ago, when Christianity spread from Jerusalem to the seat of power. Byzantium became the Second Rome when the Emperor moved east 1700 years ago to avoid barbarian attacks. This led to the splitting of the Church eventually. Likewise, with Hindus migrating around the world it is a question of time before new Arya-deshas are discovered beyond Indian borders.

People generally came to settle in India (Greeks, Scythians, Turks, Persians). Other than Romanies (gypsies), Indians have not really migrated out of Indian subcontinent, until the practice of indentured labour in 19th Century. This was because travelling abroad, especially crossing the sea (kala pani), was seen as causing loss of caste. But this changed in 20th century, as many people, even Brahmins, migrated to Europe and America. So it’s a question of time before Hinduism manifests in these new geographies. Temples are already being built in Europe and America, alongside Churches, Synagogues and Mosques.

Maybe that is why many American Hindus, despite scientific evidence to the contrary, love the ‘Out of India’ Theory, that Aryans migrated out, not into, India. Hindus migrating to the West are thus following the footsteps of Aryans of yore. These new migrants will surely reveal of how America and Europe were once Arya-desha!