Lion Atop an Elephant 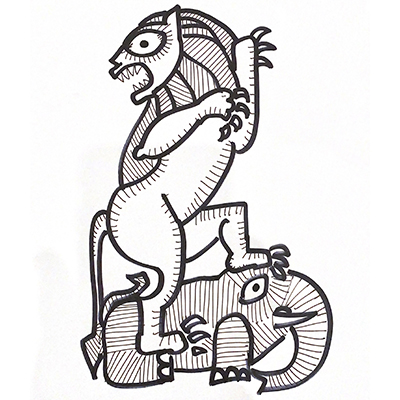 A very common motif found in Indian art is the lion standing on top of the elephant, defeating it. These images are called the Gaja-Simha images, Gaja meaning the elephant and Simha meaning the lion.

Some Orientalist scholars have tried to explain this image as the triumph of Hinduism represented by the lion over Buddhism, and this has gained popular currency in political circles. However, this is a mischievous misreading. As we know, in Buddhist art, Buddha at birth was associated with an elephant, but Buddha himself is visualised as the great lion. Both the elephant and the lion are symbols of Jain Tirthankaras. In Hinduism, the elephant is associated with Ganesha, the lion is associated with Narasimha. At the same time, you have images of Shiva flaying alive an elephant Gajasura. Shiva is also shown as flaying alive a tiger and a lion in combat. So, we cannot attribute simplistic communal meanings to it, but have to understand the metaphor that is being communicated.

Elephants are native to India, and India was famous for exporting elephants. Indian kings were called the Gajapati. While many people believed the Asiatic lion thrived in India. It is becoming increasingly evident that lions were found mostly in Central Asia and in Iran, and only in a few small pockets of Western India, such as Gujarat. Tigers are more native to India. But the symbol of the lion came to be associated with kingship, thanks to the popularity of the power of the Persian Empire. Therefore, even lands such as Singapore (Simha-pur) and Sri Lanka or Ceylon (Simhala-dvipa) where there were never any lions came to be associated with lions.

In Ashokan art, the lion, the elephant was symbol of royal and spiritual power along with the bull and the horse. In ancient Persian art, a king killing lions was a sign of royal power. In India, the lion became the symbol of the king and therefore associated with the goddess Durga. The king’s throne, Simha-asana, was also associated with the lion. And therefore the symbol of the lion on top of the elephant was in a way the ruler of India or the mighty victorious towering over the mighty vanquished.

Some people try to equate the Lion with the Kesari dynasty of Odisha and the Elephant with the Gajapati’s of Odisha but again, these associations have been found to be fraught. Perhaps a more metaphorical explanation would be that the elephant has always represented uncontrollable sexual energy while the lion represents spiritual energy that overpowers the bodily sensuousness. And perhaps that is why this image shows controlling of the senses. At another level, it represents the political power of the King controlling the material power of the elephant.

Merged images of elephants and lions are also found. They’re called Vyala, or Yali, lions with the trunks of elephants. These are liminal beings. It is not clear whether these animals are vegetarian or non vegetarians. This Yali is associated with the celestial body of mercury (Budh-graha), associated in astrology (Jyotisha) with the mercurial strength of communication.

The mystery of the Gaja Simha will remain as people can give any meaning to it but it’s clearly a potent image of triumph.