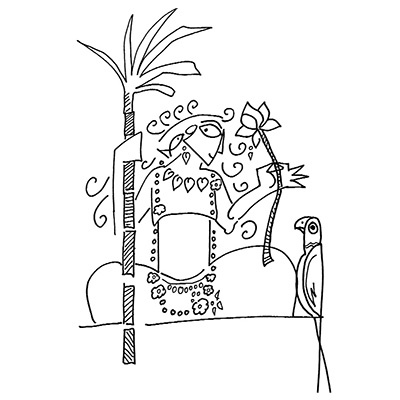 About 1,500 years ago, a book called Kamasutra came into being. The author, Vatsyayana, clarified his knowledge was not original and he had relied on many sources and authors to put it together. The original book is thought to have come from Shiva as he explained the art of pleasure to his beloved, Shakti. It was brought from the realm of the gods to the realm of humans. Many authors then wrote about it and commented on it, and Vatsyayana finally prepared a compilation.

When you read Kamasutra, you realise that it is not a guidebook on sex but a manual on how to live a pleasurable life. In fact, only 20 per cent of Kamasutra deals with sexual activity. Most of the chapters are devoted to the philosophy and theory of love and desire, and when either is termed appropriate. In other words, it is a reflection on pleasure and love. The book has about 1,200 verses. There are general chapters on how value is placed on three shastras of life, and not four. It speaks about Dharma Shastra, which relates to responsibility; Artha Shastra, which is about material success; and Kama Shastra, the pursuit of pleasure. It does not cover Moksha Shastra or spiritual freedom.

Kamasutra tells us how a refined man is supposed to live and engage with friends, how his house should be designed so it can give him pleasure, and how he needs the help of allies to find lovers. Ten chapters of the book focus on the act of love, on erotica itself – the stimulation of desire, the different kinds of embraces, caressing, kissing, biting, scratching, various copulatory positions, slapping, moaning, behaviour of women and oral sex. It talks about foreplay and afterplay.

Some sections describe how to find a spouse and make her comfortable on the wedding night, something which most Indian men seem to have forgotten about. The book discusses the relationship between multiple wives of a man and his equation with each of them. It also talks about extramarital affairs and how to deal with them in a non-moralistic way, and there are references to go-betweens and secret passages through which men can meet wives of other men.

There are chapters on courtesans. Unlike extramarital affair, visits to courtesans by married men were not frowned upon. Courtesans got to meet different types of men and in exchange, hey provided various sexual services. Some chapters describe magical rituals to enhance or replenish the sexual virility of men. Kamasutra is an exciting text of its time, covering the subject of sex in a practical manner. There is no condemnation of sex with courtesans and partners of other men, or polygamy. We see a very different world in the book than the one we live in, where sex itself is viewed as a shameful act and where women have to submit to men. This is reflected in many village songs that show men as predators.

In the 15th century, when Lodhi kings ruled Delhi, a sex manual called Ananga Ranga was written. Its purpose was very different: it taught men how to satisfy their wives so the latter remained faithful in the marriage. The story goes that a naked woman once walked into the king’s court and asked if there was any courtier who could satisfy her sexually. Koka Shastri was the man who succeeded in the endeavour. The king was pleased and asked Koka Shastri to draft a manual on ways to fulfil women’s physical needs.

Here, men and women – their bodies, sexual organs and temperaments – are classified differently. Various frameworks have been provided to link up the right kind of man with the right kind of woman. Different ways through which men and women can pleasure each other are also listed. Interestingly, Ananga Ranga, like Kamashastra, contains information about aalchemical aphrodisiacs for increased virility, and it also describes how astrology can play a role in lovemaking and in igniting love and passion.