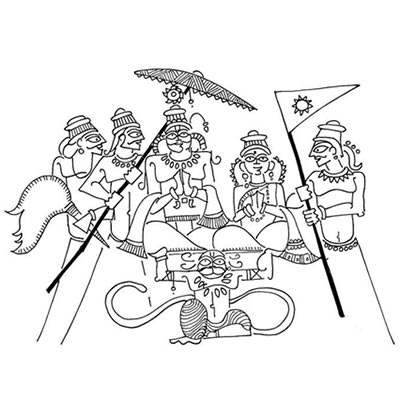 Editorial published on 16th December, 2017, in The Speaking Tree.

Verses of the Hanuman Chalisa suggest that the most efficient way to worship infinity is through this one single deity – Hanuman, writes DEVDUTT PATTANAIK

Is Hinduism polytheistic or monotheistic? In this verse Hanuman is seen as the source of all happiness, so why bother with other deities? The other deities are not derided; they are just seen as not needed. The question of monotheism and polytheism did not matter until the rise of European Orientalist studies in the 19th century. Muslim rulers did not bother so much with this question, which is why Muslim and Hindu communities lived in relative harmony. But all this harmony was disrupted when European rulers kept wondering: what is true religion? In their view, polytheism was definely primitive,pagan, false, hence myth. Today,both polytheism and monotheism, like ideology and theology, are classified as different kinds of mythology,conceptual cultural truths,and distinguished from measurable and verifiable scientific truths. Hindu mythology has always been simultaneously polytheistic and monotheistic:the same God (spelt with capitalisation) manifests as multiple gods (spelt without capitalisation). In other words,the whole manifests as parts,and every part is an expression of the whole. The limitless whole is accessed through the limited part.This approach is unique to Hinduism,and remains unfathomable to most non-Hindus.

A word commonly used for Hinduism is kathenotheism,where one god is worshipped at a time, without disrespecting other gods,and that god is seen as representative of the limitless formless divine, or God. Hence the concept of ishta-devata,the One being invoked, through whom the devotee accesses the cosmic soul (param-atma). In Hindu temples, Hanuman can be seen as an independent deity, or as a deity who is part of Ram’s entourage, just as Ganesha or Murugan can be seen as independent deities, or a deity who is part of Shiva’s family. A deity exists in an ecosystem of many deities and at the same time contains all deities within them. Hanuman is one. But simultaneously, he is many. Through him,one accesses the hermit Shiva, the householder Vishnu,as well as a potent Tantrik warrior. He is the embodiment of Bhakti. He is linked to literature and poetry with song and music, with physical prowess as well as martial arts. He brings with him Durga (power), Saraswati (knowledge) and Lakshmi (prosperity). For those uncomfortable with the idea of worshipping a celibate man,there are temples in India where Hanuman has a wife (in Hyderabad, for example), and also one where he wears a nose-ring to appear like the Goddess (in Ratanpur district, Chhattisgarh). So, says this verse, the most efficient way to worship infinity is through this one single deity.

This chaupai reiterates what Hanuman can do for us: remove problems and take away pain. In the Ramayana,Hanuman solves Ram’s problems. He finds Ram’s missing wife, Sita, by leaping across the sea to the kingdom of Lanka. He saves Ram’s injured brother, Lakshman, by carrying a mountain of herbs across the sky.He even saves Ram from being sacrificed by Mahiravana to Patala Bhairavi. If he can help God, surely he can help humanity. Perhaps this explains Hanuman’s mass appeal. Across India,at the start of roads that wind up hills and mountains, one frequently finds temples of Hanuman.People driving past throw money at these temples, offerings to the great hero to keep out all obstacles from their path.A temple is also located at the end of the journey, on the other side of the mountain,where the travellers can thank Hanuman for protecting them from all potential danger. At the frontier of most villages, and in most Hindu crematoriums, we find red-orange images of Hanuman, glistening with til oil, bedecked with Arka leaves and flowers, protecting the village from the wild, from diseases and demons, ghouls and ghosts. He embodies the positive side of masculinity (strength) but not the negative side (domination). When Hanuman was flying over the ocean to Lanka, he defeated many monsters. But he did not stop to rest. Thus Hanuman embodies selflessness, commitment, and integrity, the one who completes the most arduous task without resting. We yearn to have someone like Hanuman on our side.And to have him on our side, we need to invoke Ram in our hearts.

In folk retellings of the Ramayana,Ravana had locked up Shani, lord of Saturn;Mangal,the god of Mercury; and Pretaraja,or Mahakala,or Yama, lord of disease and death, under his throne.Hanuman released them and so Shani, Mangal, and Mahakala are in Hanuman’s debt. The Nawabs of Lucknow started the Bada Mangal festival, when Hanuman is worshipped with great fanfare every Tuesday in the summer month of Jyestha (May-June).This practice began after an image of Hanuman was found at a construction site.In this festival,local Hindus and Muslims participate,the latter providing water to the long queues of devotees who stand all through Tuesday night to see Bada Hanuman. The verse reveals the most elemental form of Hanuman and resonates with humanity’s most primitive past, when the things one wanted from divine forces were as basic as protection from dangers and cures from diseases.In the verses that follow, the higher needs of humanity are addressed, revealing Hanuman’s versatility spanning from the most elemental to the most refined. (This is an abridged version).