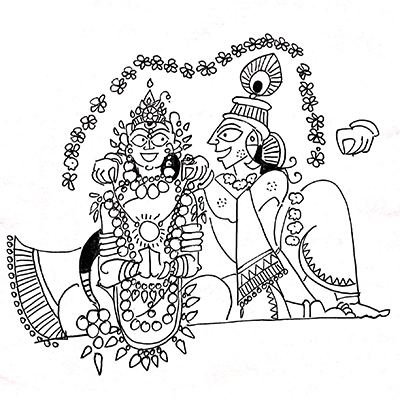 Krishna was raised by cowherds and then he moved from Vrindavan to Mathura and thence to Dwarka, where he married many women, often princesses from surrounding kingdoms. But his status in the Yadava clan was ensured by his marriage to Satyabhama, daughter of the richest Yadava clan lord, Satrajit. Her stories often give us insights into financial prudery.

Satyabhama was the daughter of a Yadava chieftain, Satrajit. He had a sacred jewel called Syamantaka. This jewel gave him a lot of prosperity. Krishna felt this jewel should belong to the entire tribe. He believed everyone should have prosperity. However, Satrajit refused to part with the jewel. One day Satrajit’s brother, Prasenjit, went out hunting, wearing the jewel on his body. In the jungle, a lion killed him. A bear, in turn, killed the lion, claimed the jewel and took it to his cave. When the news of Prasenjit’s death reached Dwarka, everyone accused Krishna of murder. Krishna investigated the scene of the death and surmised it was not a murder. It was a hunting accident. Krishna found the jewel in the bear’s cave and returned it to Satrajit.

Satrajit was very ashamed of falsely accusing Krishna. He not only begged Krishna to accept the jewel but also offered his daughter’s hand in marriage to him. Krishna refused to keep the jewel but became his son-in-law. This is how Satyabhama became Krishna’s wife. However, some men, who were angry that Satrajit gave Satyabhama to Krishna in marriage. They murdered Satrajit, and stole Syamantaka. Krishna punished the killers and brought back the jewel, but there was no way to reverse the tragedy. The jewel that could have brought prosperity to the entire country was restricted to one’s man house, where it brought prosperity but also envy and misfortune. The men who wanted to marry Satyabhama really wanted to marry her to get the jewel in dowry.

Another story associated with Satyabhama speaks about financial transactions. It’s about how people are eager to take a favour without wanting to return it. Indra, the king of Swarga needs Krishna’s help to defeat the demon king, Naraka. Krishna does do this successfully. He’s accompanied into battle by his wife, Satyabhama, who feels that her husband deserves a reward. She asks Indra for the Parijat tree which she can plant in her garden. Indra refuses to part with it, leading to a battle between him and Krishna, which he loses. Indra, who seeks help from Krishna in battle, is not willing to part with the Parijat tree, in return for the help. This reminds us of people who are constantly seeking help, but are not willing to reward those who help them.

When Krishna’s friend, Sudama comes to Dwarka for help, Krishna in his love, offers all his fortune in exchange for the puffed rice, he is given by his friend. It is Satyabhama who warns Krishna to keep a portion of the wealth for the family and not give all of it away to his friend. Thus, she is the prudent wife; the one who reminds him of the importance of worldly wealth and power. Satyabhama is a demanding wife and Krishna knows her value. It is by marrying her, he becomes a part of the Yadu-vamsa clan. All his other wives belong to other tribes; she alone is from the Yadava family. This gives him the status of a nobleman. Otherwise, he would be just the child of a cowherd. The final story associated with Satyabhama and wealth is when Narada ask Krishna’s wives for something equal to Krishna’s weight. Taking the meaning literally, Satyabhama offers Narada all her gold. Rukmini offers him a sprig of tulsi as the symbol of her love. The symbol of love outweighs all the gold in Satyabhama’s treasury.