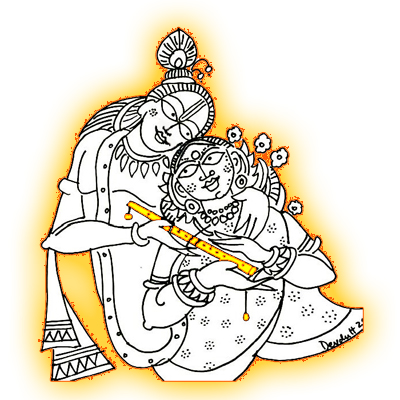 It is impossible to think of Krishna without thinking of Radha. Theirs is an eternal love story The stuff of romantic songs. And yet, some of the biggest Krishna temples in India do not enshrine the image of Radha. In Puri, Orissa, Krishna is enshrined with his sister, Subhadra, and his brother Balaram. In Udupi, Karnataka, and Guruvayoor, Kerala, and Nathdvara, Rajasthan, Krishna stands alone as a cowherd boy. In Pandharpur, Maharashtra, and Dwarka, Gujarat, he stands alone with the temple of his wife Rukmini nearby.  Even the most sacred book of Krishna, the Bhagavat Puran, does not mention Radha. To understand this, we have to look at the historical development of Krishna worship in India.

It is difficult for many people to accept that religious ideas have a history of their own. The earliest tales of Krishna, found in the Mahabharat, compiled between 300 BC and 300 AD, only refer to, but do not describe, his early life in the village of cowherds. Later around 400 AD, the Harivamsa was added as an appendix to the Mahabharata. This described in detail Krishna’s life in Gokul including his dalliances with milkmaids. But there was no mention of Radha or any particular milkmaid. The women were a collective with whom Krishna danced and sported. The mood was joyful and carnival like. In the Bhagvata Purana, compiled around 10th century in South India, where the idea of devotion to God visualized as Krishna was elaborated, Krishna disappears when the milkmaids become possessive and seek exclusive attention. The idea that God (Krishna) loves all with equal intensity was visually expressed by making the women dance in a circle, each one equidistant from Krishna who stood playing the flute in the centre.

Around this time Prakrit literature started referring to one Radha who was portrayed as Krishna’s favorite. In Hala’s Gatha Saptasati Krishna removes a dust particle, kicked up by cows, from Radha’s eye thus declaring her exalted position in her heart and humbling the other women. In these songs Krishna is not divine; he is a simple cowherd, a hero of the village folk. The songs lack sensual passion and religious ecstasy. Radha is never wife, and the dominant emotion is one of longing following separation, an emotion that eventually characterizes Radha-Krishna relationship.

In the 5th century, the Tamil epic, Shilapadikaram, refers to one Nal-Pinnai who was the beloved of Mal (the local name for Krishna). Scholars believe that she represents an early form of Radha. This idea of a favorite milkmaid gradually spread to the North and reached its climax with the composition of the Gita Govinda, a Sanskrit song written by Jayadeva in the 12th century AD where the passion of the cowherd god and his milkmaid beloved was celebrated in a language and style that took all of India by storm.

Jayadeva was born in a village near Puri, Orissa, which is renowned for the grand temple complex of Jagannath, lord of the world, a local form of Krishna. Research has shown that he was involved with Padmavati, a temple dancer or devadasi and perhaps even married her. His work was inspired by both his personal experience and his religious beliefs. Each of Jayadeva’s song is composed of eight couplets known as Ashtapadis. 24 Ashtapadis make a chapter and 12 chapters make up the entire work. In it Krishna is identified as the supreme divine being — a radical shift from earlier scriptures where Krishna is one of the many incarnations of Vishnu. The book uses extremely ornamented language to describe in intimate details Radha’s passion. As one moves from verse to verse, one is transported from the physical realm into the spiritual realm. The erotic longing becomes the cry of the soul for union with the divine. Such an approach was revolutionary; it fired the imagination of the priests and dancers who made it part of the temple ritual. Being a major Vaishnava religious centre, hundreds of pilgrims from all over India poured into Puri. Day and night, they heard the priests sing Jayadeva’s song of Radha’s love for Krishna and the devadasis depict her yearning for her beloved in graceful dance steps. Before long they were mouthing the lyrics and taking it back to their villages. In less than a century, Gita Govinda transformed from a temporal parochial literary work into a pan-Indian sacred scripture. It completely revitalized Vaishanvism in the subcontinent and catalyzed the rise of the bhakti or devotional movement in India.

Before Jayadeva, love and eroticism revolved around Kama, god of lust, and his consort Rati, goddess of erotics, who were eulogized by poets such as Kalidasa and scholars such as Vatsyayana. With the rise of monastic orders such as Buddhism and Jainism, Kama was demonized into Mara, who had to be conquered by those seeking enlightenment. In the Puranas, stories were told of how Kama was burnt alive when Shiva, the supreme ascetic, opened his third eye. All things sensual came to be seen as fetters that blocked one’s spiritual growth. But Jayadeva changed all that. Through his song he made sensuality and romantic emotion the vehicle of the highest level of spirituality. His Krishna was a reformed Kama. His Radha was a reformed Rati. He turned kama or lust into prema or romance. Krishna’s love for Radha and Radha’s love for Krishna were expressed in physical terms but they communicated a profound mystical experience.

The centuries before the Gita Govinda had seen the collapse of Buddhist orders and an increased stranglehold of Brahminism based on caste hierarchy and ritualism. God was visualized either as an ascetic (Shiva) or a king (Vishnu). With the arrival of Islam from the 8th centuryAD, the exalted status given to ascetics and kings took a beating. Cities were razed to the ground. Poets and artists took shelter in the rural hinterland and there discovered the simple ideologies of the village folk based on love and devotion. It is in this environment that poets such as Jayadeva were inspired to shape God as a simple cowherd, accessible through the simplest of emotions, stripped of complex scholarly erudition.

Inspired by Jayadeva, in the 14th and 15th century, poets such as Vidypati and Chandidas further elaborated the relationship of Radha and Krishna. It was always described as turbulent shifting between separation and union, jealousy and surrender.  In a rather bold move, these poets saw Radha as a married woman who broke all social norms to be with Krishna. Some folk narratives of this period suggested that she was Krishna’s aunt, married to his maternal uncle. Some said she was older, a mature woman while he was a boy. Even in the Gita Govinda, Radha’s union with Krishna always take place in secret. There is constantly reference to the threat of social disgrace. By making the relationship illicit and clandestine, the poets heightened the emotional quotient of the relationship. It was seen as true love that transcended custom and law. Devotees came to realize that Radha was the symbol of all those who were ‘married’ to social responsibilities, seeking liberation and union with their true love, God, who is Krishna.

Many found use of these extra-marital and incestuous metaphors rather scandalous. They moved towards a different theology in which Radha and Krishna were two halves of the whole. She was the material world; he was the spiritual soul. She was the supreme woman, he was the supreme man. They were Goddess and God whose union gave birth to the universe. The world was seen as Radha, born of Krishna’s delight. She was Krishna’s shakti or power, one who could never be separated from him. This was the svakiya (belonging to Krishna) tradition which distinguished itself from the parakiya (belonging to another) tradition. These were expressed in scriptures such as the Brahma-vaivarta-Purana.

Despite this, across India, Radha is always Krishna’s beloved, never his wife. His wives are Rukmini and Satyabhama. Radha’s relationship is different in nature when compared to Sita’s relationship with Ram. While Ram is the model husband and Sita is the model wife ,Krishna and Radha represent the great lovers who were destined never to unite. Perhaps that is why, except in religious orders of the Gangetic planes that follow the svakiya tradition, Radha is never enshrined in a temple.

Scriptures say that worldly responsibilities force Krishna to leave the village of cowherds and go to Mathura and thence to Dwaraka and Kurukshetra. He has to sacrifice the land of pleasure, vilasa bhumi, for the land of duty, karma bhumi. He has to rescue a world which was descending into anarchy — where women such as Draupadi are being gambled away by their husbands. Radha has to be given up. After leaving her, Krishna never plays the flute for Radha was his inspiration. The later Krishna never danced or made music. He is no more the cowherd; he was the charioteer riding into battle.

In time, Radha became a Goddess in her own right. Without her, Krishna was incomplete. She was the medium through which Krishna could be realized. Metaphysically, Radha came to represent the truth of our soul, the unexpressed, unrequited longings of our heart, suppressed by social realities, which cries out to Krishna. Krishna acknowledges this truth of our being, that society denies, each time he dances with Radha at night, outside the village, in secret.