Who is a Hindu? – Saraswati: Once she was a river 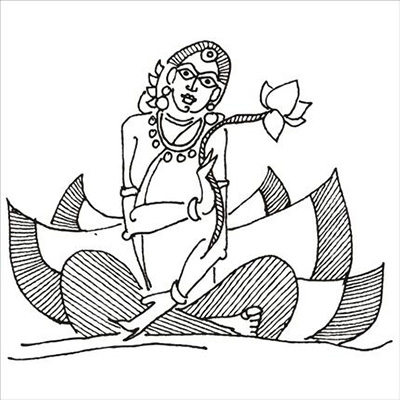 When we speak of Saraswati, the image that comes in our mind is of a goddess wearing white and holding a lute (veena) in her hand, riding a swan or perhaps a peacock. She’s the ‘Goddess of Knowledge’. Her images are found in libraries and in schools, she is associated with arts and culture, commonly seen with Ganesha by her side.

But when we read the Vedas, we hear of a very different Saraswati – the river Saraswati. Historians are fairly confident that at one time a river called Saraswati flowed in the north-west part of India, near or around the river Indus, and it is here that the early Vedic civilisation thrived. Climatic changes may have caused this river to dry up, forcing the migration of people from the Saraswati River basin to the Ganga River basin.

In most Puranas, Ganga occupies central role as the archetypal river, not Saraswati. In Prayag, people will refer to the three rivers merging with each other, Ganga, Yamuna and the invisible Saraswati, referring to a river that is still flowing underground according to some legends, considered important enough for the government of India to invest in its search.

In the Vedas, we also have reference to another goddess called Vak or the ‘Goddess of Speech’. There are hymns about how important speech and language and words are. Being an oral culture and because all the sacred texts were orally transmitted, great value was given to speech, to intonations, to etymology, to grammar and to the meter of sentences, and therefore this idea of speech had become important. This goddess eventually comes to be associated with Saraswati.

The word Saraswati is derived from something which is fluid, Sarasa, which means a good fluid, su-rasa. It can be taken in two ways, both literally and metaphorically. A collection of water or a collection of juices that are evoked in our body when exposed to literature and music. Overtime, Saraswati moves away from being a representation of a river and becomes a representation of intellectual outpouring. The river we are speaking about now, as history progresses, is not the physical or geographical river of Vedic times but a psychological river of the arts of Puranic times.

This idea is taken up not just by Hindus but also by Buddhist and Jains. In fact, the earliest image of Saraswati comes to us from a Jain temple in the Mathura region, dating to around the 2nd century AD. The image shows a goddess with a book in her hand and it is said to be the earliest representation of Saraswati. She is known as Shruta-Devi in Jainism, considering that the wisdom of the Tirthankaras has to heard (shruti).

In Buddhism, too, the Goddess Saraswati becomes important, especially with the rise of Maha-Yana Buddhism which gave greater value to women than men. We find the rise of the Goddess Tara who is equated with the wisdom of Buddha, who provokes his compassion. The earliest Buddhist iconography of Tara comes to us from the Ellora Caves in the 7th century, where we also find the image of Maya-Mayuri with a dancing peacock by her side and a student working on a desk.

Hindu iconography becomes big from the 5th century onwards. This is when the Puranas had consolidated themselves and people referred to the Hindu trinity, the male trinity, each with a female consort, for the sake of symmetry. By this time Brahma, the creator, was associated with Saraswati, embodiment of knowledge. She was visualised holding memory beads, a book, a pen and an inkpot and the lute (veena).

In Puranic stories there are references of Brahma chasing his daughter who is identified as Shatarupa, Sandhya or Saraswati, indicating the problematic relationship between a creator and his creation. Who creates whom? Very often, Brahma is not worshipped as he assumes he is the ‘creator’ when in fact, he is created by the goddess. In artwork, Brahma and Saraswati are infrequently seen as a couple. However, in many Vishnu artworks, Vishnu is said to have two wives, Sridevi and Vakadevi, making Saraswati his consort. We are told that because Lakshmi and Saraswati don’t get along, Vishnu gives Saraswati to Brahma. The relationship between Brahma and Saraswati remains ambiguous.

By the 13th century, when the temples of Khajuraho and in Gangaikonda Cholapuram Brihadeeshwara were being built, we find independent iconography of Saraswati flourishing on the temple niches. She is associated with the goose (hamsa) who can separate milk from water, an indicator of intellectual discernment (buddhi). While more and more temples were dedicated to the ‘Mother Goddess’, exclusive Saraswati temples continued to be rare, just as exclusive Lakshmi temples are very rare. Both goddesses were subsumed under the image of the great Goddess Shakti who is simultaneously wealth, knowledge and power, and who rivalled the powers of Shiva and Vishnu.