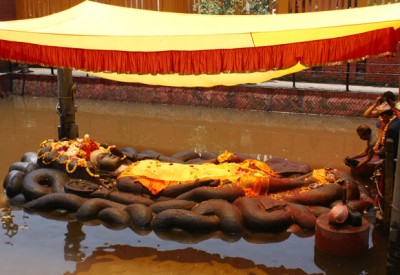 Published in Speaking Tree on August 2010.

When the rains fall, when the walls go damp and the food is covered with fungus, know that Vishnu, the guardian of the world, has gone to sleep. He slumbers for four months, the Chatur-maas, while the earth is submerged with flood waters. It is the annual Pralaya, after which the world renews itself.

This annual submergence takes place in the dark half of the year. The ancient Rishis divided the year into two parts: the first, from January to June, when the rising sun edges towards the Pole Star and the second, from July to December, when the sun retreats southwards. The northward journey is marked by entry into the House of Capricorn, or Makara, the dolphin, symbolizing love and life; is it the time of spring and summer when days get warmer and brighter. The southward journey marks the entrance of the sun into the House of Cancer or Karka, the crab, that gnaws into the light, makes the days shorter and colder. It is in this dark inauspicious second half that rain clouds cover the sky and Vishnu goes to sleep. The world is left in the care of the Goddess and Vishnu’s avatars.

When Vishnu sleeps, the guru of the Daityas, Shukra, pounds the magical Sanjivani, in the subterranean region. This is what brings back the earth’s fertility, they say; the seeds germinate, crops rise up from under the earth. Everything is green. The moon is dominated by Kama, god of lust. Husbands and wives trapped at home all day enjoy intimate embraces. It is said this is the period when the Kamasutra was written.

These four months are marked with prayers and festivals, perhaps because there was nothing else to do, and perhaps in the hope that the rains are adequate, not too less or too much. The first of these is on the full moon of Ashadh, when the guru is remembered. A fortnight after this comes the month of Shravan when people fast. All kinds of indulgences like alcohol and non vegetarian food and spices are curtailed.

In the bright half of Shravan, on the fifth day of the waxing moon, snakes or Nags are worshipped. In the dark half of Shravan, on the eighth day of the waning moon, the birth of Krishna is celebrated. In between is the full moon day when sisters tie threads on the wrists of brothers, seeking protection. On this day coconuts are hurled into the sea by fisher folk as the rains abate and soon the sea will allow them to fish once more.

In the month that follows, Bhadrapad, Ganesha comes into our lives with his mother, Gauri, who wears a green sari, reflecting the greenery covering the earth at this time. His image and that of his mother is made of clay. After being worshipped for ten days, this image is immersed in water, a reminder of the cyclical nature of all things. After Ganesha’s departure, the ancestors rise up and are worshipped by the living. The ritual of Shraadh is performed to reiterate to the Pitrs that the living are producing children to ensure their rebirth.

By this time, the crops have reached final form. It is time for harvest. The Daityas who have risen from the subterranean regions are to be killed, a violent act that generates food for man. Thus in the final month of Chatur-maas there are festivals celebrating the death of many demons: Durga kills Mahisha following nine nights of battle and Ram kills Ravana at the same time resulting in the Dussera festivals. In the full moon that follows, the Sharad Poornima or Kojagiri, the Goddess emerges in her gentle form and dances with Krishna as Radha. War resumes in the following fortnight with Krishna killing Naraka and Vaman crushing Bali in the days that mark the festival of Diwali. And since the killing of Daityas brings prosperity, the Goddess is worshipped as Lakshmi. She is also worshipped as Kali, a reminder that wealth generation involves violence and must not be taken lightly.

Shortly after Lakshmi’s arrival, Vishnu wakes up and on the 11th day of the month of Kartik, marries her, she taking the form of the Tulsi plant and he talking the form of sugarcane or the Shalagram stone. This marks the end of the slumber of Vishnu and the start of the marriage season.