Is Shiva the corporate destroyer or Kalki? 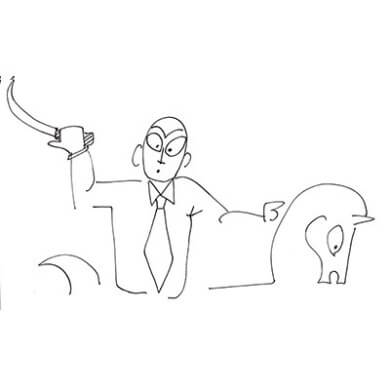 Kalki, the tenth avatar of Vishnu, is very popular amongst young people, who visualise him as an Avenger, part of a cosmic end game. He is visualised as riding a white horse, brandishing a fiery sword, cutting down people. The story about Kalki is not very wellknown; but the general belief is that he destroys bad people and restores the good world order, very much like a superhero. However, that is not the case.

The tenth avatar of Vishnu is seen as the form before Pralaya. He is mentioned first in Mahabharata and is linked to Parashurama, who kills unrighteous kings. His story is elaborated primarily in the Puranas and shows influence of Zoroastrian and Christian messianic ideas. But there is another destroyer in Hindu mythology and that is Shiva. Shiva is part of the Hindu trinity, and in popular understand these three forms of divine are responsible for Generating, Operating and Destroying the world (hence English acronym GOD, as per whatsapp forwards).

But is there a difference between Shiva, the Destroyer, and Kalki, the Destroyer? The confusion arises because Kalki is supposed to be a form of Vishnu also known as the Operator or preserver or sustainer. An understanding of this difference helps us understand the value of destruction in life.

In Hindu mythology, Brahma creates the world; therefore, he is associated with desire. He is visualised as a priest. Desire is expressed as and when the ritual performer expresses his sankalp, or intention, for conducting the ritual. While Shiva rejects rituals, he also rejects all things material. He wants nothing and so expresses no Sankalp. He is visualised as a hermit, as someone who destroys desire, and walks away from the life of a householder. He will not create an organisation. He does not see the value of creating a world that ultimately indulges the ego. Vishnu, on the other hand, is the preserver of culture, rituals and social structure, thereby restoring order. His actions attract Lakshmi (affluence and abundance). He places desire in context, and does not let it go out of hand.

The Hindu Trinity is not involved with nature ( prakriti) which is visualised as the Goddess, hence eternal; they are creating, sustaining or rejecting culture ( sanskriti). That is why destroyer Shiva who has no desires is visualised as a hermit smeared with ash, and the preserver Vishnu who does not reject desire is visualised as householder, with silk and sandal paste.

Why then does Vishnu destroy things? He destroys things, in the form of Kalki, when people stop respecting dharma, in other words, when humans behave like animals: territorial and dominating, more interested in being alphas than helping the omega. When people become dominating and territorial, the existing society needs to be destroyed and a new structure must be formed. We see Vishnu struggling to maintain the social order, in various forms: as Parashurama, Ram, and Krishna. But when everything fails the entire system, the entire edifice of the structure of society must be destroyed, and Vishnu shall do this as Kalki.

Many leaders are so busy creating and desiring, they do not often wish to let go. This is the reason they don’t delegate, they don’t retire and they do not allow companies to move on without them. These leaders cling to their Brahma role, which creates chaos and disorder, necessitating the arrival of a Kalki, who, to save the organisation, needs to get rid of such leaders, and change the old order to a new system.

Shiva builds not organisations. He inspires leaders to let go of their attachment to organisations and retire, having realised the futility of ambition and success in the larger context. A Kalki on the other hand gets the old order forcibly dismantled to usher in a new era. He marks the transition from Kali-yuga (decline phase of organisation) through Pralaya (turmoil of restructuring) to Krita-yuga (golden phase of resurgent organisation).