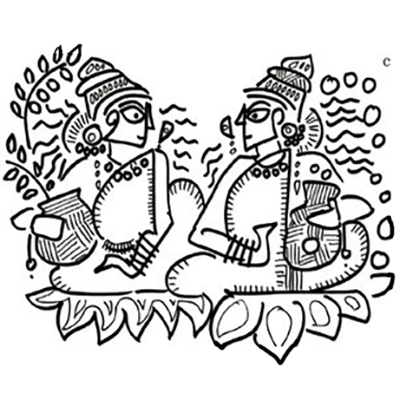 Feudal societies are typically agrarian and land (kshetra) based and so controlled by land-owning gentry (kshatriya) often confused with warriors, a role that they initially performed before they realised they could outsource as landowners. The market (bazaar) was the domain of the manufacturing craftsmen, until the middlemen traders and money-lenders (vaishya, vanik) took their place, and pushed the goods-producing artisan lower in the social hierarchy, a notch above the service providers (shudras).

The discomfort with all things associated with the market can be seen in India when holy men warn people not to be bhogi (seek satisfaction of desires), when desire for goods and services and ideas is what creates the market, with the goods provided by the craftsmen, the service by the shudras, and the ideas by the brahmins. Rather than ask for fair wages (dakshina) one was encouraged to do service (seva) without expectations (nishkama).

This feudal tone is evident in the general disdain in India for servants (chakars) and slaves (dasa) shoved to the bottom of the caste pyramid. In popular religion, to provide God, or his middleman, the guru, free service is a sign of deep piety. The concubine, loyal to a single feudal patron, was granted more respect than the prostitute who auctioned her services but was a thorough professional, treating all paying customers equally.

The battle between the Old World of Europe and the New World of America is a battle between kshatriyas and vaniks, with the kings of yore and their Church not supporting the newly emerging bands of industrialists, following the scientific revolution, who needed capital for their business. So they split from the old Church (Catholic), and created their own new church (Protestantism), that did not look down on moneylending, and moved from Europe to America to create a republic that supported free enterprise and did not care much for inherited entitlement. In the new world order created by Americans, professionalism matters more than loyalty, the fickle Shree-devi who needs to be attracted was preferred over Bhu-devi who has to be conquered and controlled.

In India, the feudal orders were legitimised by brahmins, who helped establish new villages especially in the south, and created systems for tax collection for God’s first servant, the king. The market forces were patronised by the monastic Buddhist and Jain orders, who looked down on violence that was integral to war and agricultural activities. Not surprisingly, holy Hindu texts such as Ramayana and Mahabharata refer more to kshatriyas and brahmins, while the Buddhist Jatakas refer more to merchants and traders.

Of course things are not so simple. There were many kings who favoured Buddhism and Jainism, and in South East Asia, it is Buddhism that prevailed over Brahminism. And many trading communities embraced Brahminism such as the Gujarati Vaishnavas and the Tamil Chettiars.

Overall however, India favoured the kshatriya feudalism to market-based economies of vaishyas. Once a country of sea-faring merchants, we outsourced international trade to Arabs, and became inward looking, frogs in the well (kupa-manduka), valuing submission to authority (bhakti) rather than revelling in the quest for bhoga in the bazaar.