Getting better and better 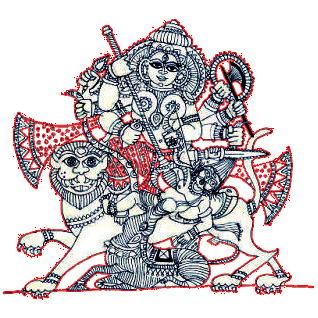 The Durga statue worshipped during Dassera festival in Bengal, Orissa and Assam is made over a period of several weeks, starting soon after the chariot festival ends in Puri, Orissa. First a frame is made of bamboo that is covered with straw, then layered with clay, then covered with layers of paint. Finally, the details are drawn. The statue is then dressed in cloth and delicate jewelry made using pith and bark, and finally unveiled on the festival days. After the image is worshipped, it is dunked into the river, dissolved until the process begins once again the following year.

Presentations made to sell an idea to customers need to be created like a Durga statue. Not all at once but slowly and systematically. First the broad ideas, then the details, then the data supporting the claims, then the graphs and the charts and the images, finally the layout and cosmetic touches before the grand presentation to the client. After which, the presentation needs to be discarded and one has to start again anew, with a fresh outlook, with learning from the past.

Chandan was to make his first sales presentation to a client. And he was nervous. Prabhu, a senior colleague, walked past and saw Chandan struggling to align the text. “Which slide is it?” Chandan said it was his second. “How many slides are there in toltal?” Chandan did not know. Prabhu realized Chandan was not following the Durga-method of content creation. “You are so obsessed with the face of the deity that you have already painted its eyes in fine detail, without bothering to even start on the torso and limbs. The entire image will turn out to be disproportionate, with unequal detailing, more on the face and less on the limbs. It will look awkward and deformed. You have to think of the whole image in layers,” he said metaphorically.

He then explained in detail, “As the bamboo framework, visualize where you want to start, where you want to end the presentation. This depends on where you want to take the client with your narrative. As the straw body, put in whatever data you have in your mind. As the clay, gather data  from others, that is not easily accessible. As the first layer of paint, do the editing. As the second layer of paint, add the images and graphs and charts. Finally, for the sari and jewelry, focus on the aesthetics of the statue: the alignment, the consistence of font, the bullets, the styles. Pay special attention to the two eyes — the start and the finish of the presenation, what is the introduction and the final take home. Then worship your presentation by rehearsing several times, and finally presenting it to the client. Then, dissolve the image in water: don’t get too attached to it, take feedback and criticism and start working on a new presentation for your next sales pitch. That is the only way you will keep learning and keep improving, combining efficiency with effectiveness.”