Who is a Hindu? Indra: Entitled, insecure, dispensable 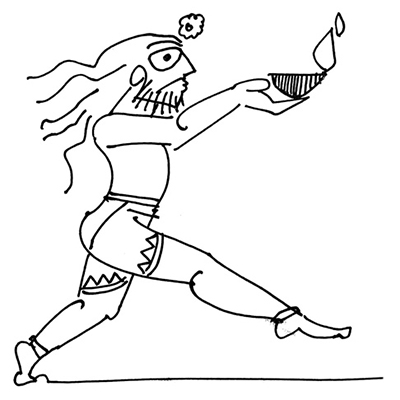 Rishi Mugdala lived a simple contemplative life and was offered a place in swarga, the Hindu paradise, where all desires are indulged, and one lives surrounded by all the material comforts one can imagine. But Mugdala refused to go there on learning that the stay in Indra’s swarga was temporary, lasting only as long as you had merits in your karmic balance sheet. He sought a more permanent residence, a heaven greater than Indra’s swarga, where one is free from all desires. This story comes from the Mahabharata, composed between the Mauryan and Gupta empires. It reveals a major shift in Hindu thought. Greater than the heaven of material pleasures was the heaven of spiritual liberation.

Indra was the primary god of the Vedas. Three thousand years ago, he was offered the intoxicating soma through Agni, the fire god. Indra, the great warrior who rode a chariot, struck down his enemies, such as Vritra, Namuchi, Emusha, and Sambara, who released cows from dark caves, was adored by all. However, 2000 years ago, when the Puranas started being composed, we discover a very different Indra!

In the Puranas, Indra is a thunderboltwielding storm god, ruler of the skies, who leads devas, and behaves like an entitled, perennially insecure hedonist. He rides a white-coloured elephant, Airavata, which has seven trunks and six tusks. He enjoys the company of damsels and musicians and loves soma so much that he ignores his gurus, and is punished for it. He loses wars against his half-brothers, asuras, and his fortune, and is forced to beg his gurus to help him. They in turn point him towards Brahma, who directs him to Vishnu, or Shiva, or Devi, who help him regain his paradise. In other words, Indra shifts from being the major Vedic god to a minor Puranic god, from a god who has the maximum number of verses in the Rig Veda, to one who has no temples built in his honour. At best, he is the lord of the eastern direction, associated with fresh water and rain.

The oldest image of Indra comes from the Bhaja caves, near Khandala and Pune. It is on the wall of a Buddhist vihara cut into the mountain side. This is dated to 2nd century BCE – about 2,200 years ago – and here we see, in a Buddhist shrine, for the first time, Indra riding an elephant. The first visual depiction of Indra – a very Puranic Indra!

In Buddhist lore, he is present when the Buddha is born and when the Buddha becomes the Buddha, i.e. attains enlightenment, and he encourages Buddha to spread his wisdom to humanity. In Indonesia, Cambodia and Thailand one does come upon images of Indra on the fantastic Airavata, revealing that Hindu mythology spread to Southeast Asia about 2000 years ago, along with Buddhist stories. Perhaps Indra’s popularity amongst Buddhists, who saw him as bowing to Buddha, led to his rejection by Vedic and later Puranic Brahmins.

In the Ramayana, which was reaching its final form when the Bhaja caves were being created, we learn how Indra’s son, Vali, is killed by Ram. Mahabharata, also composed during the same time, informs us how another of Indra’s sons, Arjun, is helped by Krishna. Later in Harivamsa, we learn how Krishna saved Indra from Narakasura. In Bhagavata lore, Krishna defeats Indra by raising the Govardhana mountain and later, in an aerial fight, to claim the Parijata tree. In Purana after Purana we learn how Indra loses paradise to asura after asura, and how it is restored to him when Vishnu defeats Bali, Shiva defeats Andhaka, and Durga defeats Mahisha. When the ocean is churned by the devas and the asuras, Vishnu takes the form of the enchantress Mohini to ensure that amrita, the nectar of immortality, goes to the devas led by Indra. Indra is clearly being favoured, which shows his entitled nature. But why? It is never clarified.

But then, a closer examination of Puranic lore and folklore tells us something else. We are told that Indra can be replaced by any king who performs a thousand yagnas, or by a sage who performs tapas. In other words, he is not eternal like Shiva, or Vishnu. His glory is temporary as someone can always outshine and replace him. This is why he is insecure. Who wants to worship an insecure god?

The great gods of the Puranas, Shiva and Vishnu, embody wisdom, security and permanence. They were not seen as attached to wealth and glory. Their heaven, Kailasa or Vaikuntha, was the destination sought by sages like Mugdala. For here, desires were not fulfilled. Here, one outgrew desire.

This article is also listed under Puranas, Shiva, Vishnu