The story of Ram’s elder sister 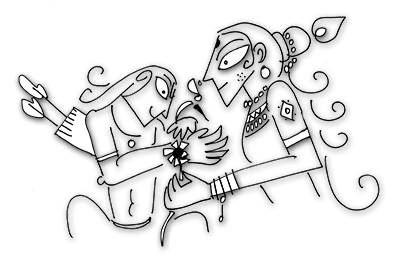 Valmiki Ramayan does not mention Ram’s sister, however, in the Mahabharata we learn of King Lompada who adopts the daughter of Dashratha. In later literature, this daughter of Dashratha becomes Ram’s elder sister, Shanta. In Telegu folk songs she is described as being furious when Ram abandons Sita following street gossip.

According to the Oriya Ramayan, following adoption, Shanta is given in marriage to Rishyashringa, a sage whose celibacy causes drought in Lompada’s kingdom. Following the marriage, the rains come back. This tale is consistent with the traditional theme of Vaishnava literature that condemns absolute abstinence which is seen as world-denying hence world-destructive.

Though Dashrath seems to have fathered Shanta without any difficulty, he is unable to father any more children. Dharma insists that a man must father a son and continue his lineage and that a king must produce an heir for the throne. A desperate Dashrath therefore marries a second and a third time. When nothing works, he decided to perform a yagna and compel the gods to give him a child.

The priest, who Dashrath invites to perform the ceremony that will restore the fertility of his household is none other than his son-in-law, Rishyashringa, implicitly suggesting that Rishyashringa’s celibacy was in someway responsible for the barrenness of his queens. Just as Rishyashringa’s marriage to Shanta brought rains to Lompada’s kingdom, Rishyashringa’s yagna will bring children to Dashrath’s queens.

One can argue that is it a later interpolation and therefore not valid. But we must not forget that Valmiki’s Ramayan does not mention the famous ‘Lakshman Rekha’ and that in Valmiki’s Ramayan there is no mention of Ahilya turning into stone or of Shabari feeding Ram berries. These ideas come from later regional tellings of the Ramayan.

Ramayan is like an open source software, much like Hinduism, where new ideas continuously enter and only that which survives the test of time is celebrated. What is often celebrated in India is emotional bonds. Ramayan revolves around relationship between father and son, brothers, king and subjects, husband and wife. Perhaps someone felt the need for Ram having a sister and so Shanta, adopted daughter of Lompada, becomes Dashrath’s biological daughter.

We find this in Shiva’s story too where Shiva, associated with sons, has occasionally, as in a brief reference in Padma Puran, been associated with a daughter called Ashok Sundari, amplified by the popular television serial, perhaps in keeping with the times where we want to celebrate our girl children too.