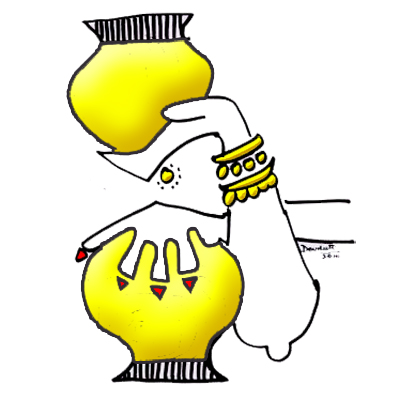 Published in Speaking Tree, Times of India on 2 May 2010.

As wealth poured into IPL and everyone raved about the meteoric rise of the brand, it was clear that Alakshmi was just round the corner. Alakshmi is the goddess of strife. She causes quarrels. She is called Jyestha or the elder-one because she is the elder sister of Lakshmi, goddess of wealth, one who is inseparable from Lakshmi. Not surprisingly, IPL’s success is always associated with in-fighting and quarrels and naked hostility.

In Greek mythology, Alakshmi is known as Eris, the goddess of discord. Her brother is Ares, god of war. Once Eris was excluded from a wedding to which all other gods and goddesses were invited. So she threw a golden apple into the wedding hall interrupting the wedding banquet. On the golden apple was written the words ‘for the most beautiful goddess’. Paris, prince of Troy, judged this beauty contest. The winner ensured Helen, the most beautiful woman fell in love with him. But the losers ensured that the Greeks who also loved Helen sailed across the sea, killed Paris and destroyed the city of Troy after a long ten-year battle.

Though in Bengal and Orissa, some say, Alakshmi is visualized as an owl seated beside Lakshmi, Alakshmi is a secret goddess, invisible to all. The only way to see her is to have Saraswati, goddess of knowledge and good sense by your side. But Lakshmi will never let Saraswati stay in the same house as her. She will go wherever there is Saraswati and kick her out, making room for Alakshmi. Why does she do that, one wonders. But then one is told that Lakshmi is a whimsical goddess, she does not like to stay in one place too long. By kicking Saraswati out and by getting Alakshmi in, she ensures there is a fight in the house and when there is a fight, wealth invariably moves out of a house. But if Saraswati is in the house, good sense prevails, fights do not take place and Lakshmi is unable to move out.

In the Ramayana, Lakshmi resides with Ravana hence his city is made of gold. But with Lakshmi resides an invisible Alakshmi. Hence, Ravana, despite being a great scholar, acts like a megalomaniac, risking the welfare of his city, even his family, just to satisfy his lust and his desire for revenge. He refuses to entertain any sound advise and that is the cause of his downfall.

In the Mahabharata, Lakshmi resides with the Kauravas. They live in royal comfort all their life, yet, no thanks to Alakshmi, they are consumed by bitterness and jealousy and rage against their cousins, the Pandavas, who have nothing. That ill feeling causes Duryodhana to ignite a war which leads to the death of all his brothers. If only he had shared just five villages, as Krishna suggested, peace would have prevailed. But Alakshmi would not allow good sense.

Krishna is a form of Vishnu. And they say that Vishnu secretly keeps Saraswati in his mouth, on his tongue, hidden from Lakshmi. That is how he manages to keep Alakshmi at bay. That is why Lakshmi is always by his side.

As society increasingly values Lakshmi over Saraswati, a trend reflected in IPL, we are inviting Alakshmi into our lives, to our great peril. Time to watch out.