Stains of the Jambul 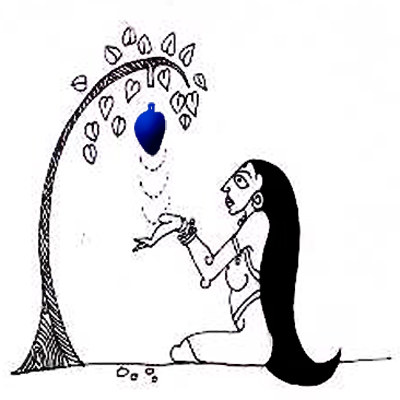 Last week, 80-year old Vithal Umap, passed away during a stage performance. He was one of the great bastions of folk theatre in Maharashtra and I had the honor of watching him perform a few years ago at Ravindra Natya Mandir. I watched this old man transform from a passionate storyteller to a demure Draupadi in seconds as he narrated and performed before a spell bound audience ‘the sacred tale of the Jambul fruit’, Jambul Akhyan. I was so impressed that I paid him a visit at his house and offered him as a gift the illustration that accompanies this article.

Like all folk theatre, this performance began with the invocation of gods and goddess. Umap told me, “They say that gods and goddesses, formerly known as Gandharvas, are very happy when there is a performance. This is why in the old days people used to invite storytellers and artists to their homes to perform during weddings and festivals so that happy gods and goddesses would bless the patron and his family.” That was before the British came to India and introduced the practice of ‘tickets’ where you pay for every performance reducing theatre into entertainment and transaction rather than an offering to the divine.

The performance narrated an event from the Mahabharata when Draupadi, common wife of the five Pandavas, plucked a Jambul without realizing that it was a special fruit that a Rishi had sworn to break his fast of twelve years,with. “You have contaminated the fruit,” said Krishna, “If the sage finds out, he will curse you and your husbands. But if you open up your heart and confess to a secret that you have hidden from your husbands, the power of the truth will cause the fruit to join the branch once again.”

With great trepidation, Draupadi looked into the eyes of her husbands and said, “I love five of you. But I love a sixth too. I love Karna, the charioteer who serves Duryodhana. I regret not marrying him on account of his caste.”

The revelation came as a shock to the Pandavas. They were not sure whether to be angry with Draupadi or ashamed of themselves. They realized they had failed her individually and collectively. Having revealed the truth of her heart, Draupadi had been cleansed. She was now able to refix the fruit to the tree and the Rishi was able to break his fast.

It was a simple story with a disturbing theme of extra-marital affections of a woman. As the play concluded, Umap spread out his arms and looked at the audience and wondered aloud, “Tell us, gods and goddeses, and assembled noble people, does the fall of a leaf into the river contaminate it?” And then as we left the theatre we were all given a Jambul fruit and told to eat it. “Before you judge Draupadi, eat this fruit. If it stains your mouth purple,” we were told, “know that you too hide a secret in your heart that you dare not share with the world.”

As the Jambul stained my mouth, I realized the sophistication of folk theatre. In the raw grating honesty of this performance there was more wisdom than anything one encounters in modern sanitized commerical storytelling. No wonder it is loved by the gods.

It is through bards like Umap that for thousands of years the wisdom of India spread across the countryside. It feels sad that despite this, his community was treated as inferior and low, Dalits who were denied basic human rights for centuries. “While we danced and sang, the upper castes went to schools and colleges,” he told me with a smile that lacerated my heart. May his soul rest in peace.