Ranganatha, and his Muslim consort 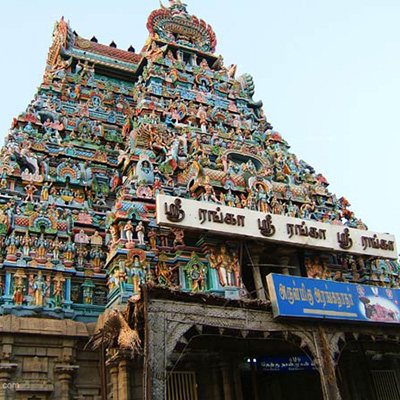 A six-hour drive from Chennai and a bridge over the river Kaveri takes you to Shrirangam, one of three river islands, that houses the images of Ranganathaswamy, who is Narayana, the reclining Vishnu. The other two islands are Shrirangapatna and Shivanasamudra in Karnataka.

Deep within seven concentric enclosures (prakaras), high walls with magnificent gateways (gopurams), is the shrine with its golden vimana. Within, we see Vishnu as the reclining Narayana, locally known as Ranganatha, on the coils of the five-hooded serpent known as Adi-Sesha.

When the deity gave me darshan, I saw the unadorned black stone icon, gleaming, his hands and feet encased in gold. There were no flowers. Why? ‘He spent the last few days riding the city on his vahanas, and so has been given an oil massage to rest his tired limbs,’ the priests informed me. This transformation of God into a person, a king, is something that is common in Hindu temples, especially Vishnu temples. We see this in Puri, Odisha, as well as Nathdvara, Rajasthan.

Traditionally, temple deities face the east. But Ranganatha faces the south. Why? This image was the family deity of Ram, king of Ayodhya, who gifted it to Vibhishana, king of Lanka. Vibhishana was supposed to take it home, but he stopped at Shrirangam and placed the image on the ground, as he was too tired to carry it further. The image refused to budge after that and when Vibhishana begged the lord to relent, Ranganatha agreed to recline facing south, always blessing Vibhishana and his subjects, the residents of Lanka. Ram once fought the people of Lanka to liberate his wife, Sita, who had been abducted by their former king, Vibhishana’s elder brother, Ravana. But after the war, and the rescue of Sita, there was no animosity left. In fact, there was no animosity even during the war. Love did not wane, even when Ranganatha was punishing the man who was separating him from his beloved.

Shrirangam is the foremost of the 108 Divyadesams, Vishnu temples that anchor the faith of the Shri-Vaishnavas, an order of Brahmins, whose first acharya was the venerable Nathamuni. Ramanuja-acharya organised the institution nearly 900 years ago. Ramanuja was renowned for intellectual prowess (he linked Vedanta to Bhakti) and administrative skills (he established norms of ritual and governance in the temple). The institution still thrives, as does the temple, attracting millions of devotees, is testimony to his genius.

Like all institutions, Shri-Vaishnavism has its divisions and its politics that makes no sense to outsiders, but evokes great passion amongst followers. There are the northern Vadakalai, who sport U-shaped namam on the forehead and state that a devotee must cling to God as a monkey clings to his mother, who are opposed by the southern Tenkalai, with their Y-shaped namam on their forehead, who believe a devotee must rest assured that God will take care of him as a cat takes care of her kitten.

Both groups venerate Ramanuja for whom a shrine is built in the temple complex. The shrine has an image of the saint placed on top of the spot where his mortal remains were interred (unusual for a temple complex). Some believe that the image is actually his mortal body preserved by special paste.

Legend has it that the temple was attacked and plundered by a Muslim marauder called Malik Kafur who took the utsava murti of Ranganatha, along with the gold and jewels of the temple, back to Delhi. The image would have been smelted for its metal content, had it not been for his daughter, Surathani, who fell in love with the image, and claimed it. When a group of intrepid performers from Tamil Nadu entertained the sultan with song and dance, and asked the icon as their reward, Malik Kafur readily gave it to them, perhaps annoyed by his daughter’s excessive attachment to it. For the performers, who were disguised priests, ‘it’ was ‘He’, divinity personified, and they took the icon back to the temple. For the princess, the ‘doll’ was ‘her beloved’. She had fallen in love with whatever it embodied. So she left Delhi, travelled all the way to the Srirangam, and died on the temple steps. In a dream Ranganatha told his priests to build shrine to honour the Muslim princess-devotee. She was named Bibi Thuluka Nachiyar, the Muslim bride, and her painting was enshrined in a temple of her own within the temple complex. Every year, her marriage to Ranganatha is re-enacted with pomp and reverence.

Is this story history (objective truth), or myth (subjective truth), fantasy (no one’s truth), or legend (loosely based on some historical truths)? We can argue forever. But look at the spirit: what begins with violence (plunder of a Hindu temple by a Muslim king) ends with love (marriage of a Hindu deity with a Muslim princess). This is what makes Hinduism unique. An ability to embrace and include alternate ideas, despite fierce opposition, from within (radical puritanical Muslim-hating Hindus) and without (radical puritanical Hindu-hating Muslims). Ranganatha smiles and balances all parties as he eats roti with butter and sugar every day for breakfast, after it has been served to his Muslim bride. Roti, in temple lore, is Muslim food. Traditionally, Vishnu in South Indian temples is offered only rice. For her pleasure, sometimes, he even wears the Muslim lungi instead of the traditional Hindu dhoti.

In Shri-Vaishnava shrines, greater value is placed on Tamil devotional poetry, the 4000 Divya Prabandhams, composed by the local poet-saints known as Alwars, than to Vedic hymns. This preference for regional poetry over Sanskrit scriptures is common in temple traditions, for it is the local hymns that connect masses to the divine, appealing directly to the heart. The point is not whether it is Sanskrit or Tamil, ancient or medieval, Vedic or Bhakti, Ayodhya or Lanka, Vadakalai or Tenkalai, even Hindu or Muslim. The point is immersion in the boundless affection that emanates from Ranganatha, whose name means ‘lord of the colourful theatre that we call life.’