Ramayana Isn’t a Lesson In History Or Geography 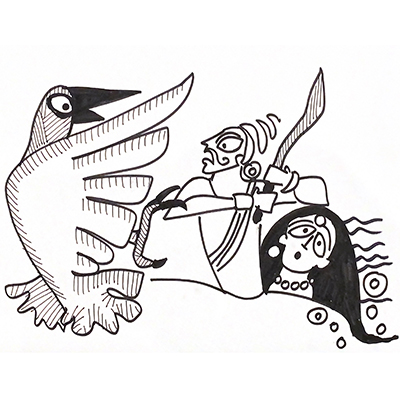 Many people see Ramayana as history. This means they seek the exact location where the events of the Ramayana took place. But this poses a huge problem.

Take the case of where Jatayu was killed. If one travels to Kerala, one finds the Chendamangalam site — here, a gigantic statue of a dying Jatayu has been created by the locals, which attracts many tourists. This is considered to be the site where Jatayu died.

However, if you travel northward, in the region known as Nashik in Maharashtra, Sita is said to have been abducted there. But here, there are at least two locations, Dharashiv and Taked, which identify themselves as the place where Jatayu died.

Such confusion occurs in other aspects of the Ramayana. For instance, Rishyasringa Muni’s ashram is where Dasharatha performed the yagya that led to the birth of Ram and his brothers. In some legends, Rishyasringa Muni was married to the Dashrata’s eldest daughter, or to Dashrata’s niece, born to the king Lombarda.

In traditional belief systems, Rishyasringa Muni lived in the Gokarna region of Karnataka in a place known as Sringeri, now linked with Adi Shankaracharya. But, in Bihar, there is a temple that is linked to the site where the ashram existed and where the ritual was performed. In Kullu-Manali, there is another site which says the Sringeri existed.

When it comes to Valmiki, some people say that he lived in the Nepal region in Chitwan. But there are legends that connect a Valmiki ashram to Kanpur as well. Moreover, in the Wayanad region, there are many temples associated with Sita, Luv and Kush, who resided in the Valmiki ashram, as per local legend.

Chhattisgarh’s Turturiya, too, has an ashram of Valmiki, which is identified as the birthplace of Luv and Kush. Sitabinji in Keonjhar, Odisha, is another place linked to Sita, Luv, Kush and Valmiki. Inscriptions found here are said to be writing lessons by Luv and Kush.

At present, there is a controversy going on about where Hanuman was born. Karnataka claims he was born in the Hampi region of Kishkinda. But in Nashik, Maharashtra, there is another shrine, which identifies itself as Hanuman’s birth place.

Tirupati Devasthanam of Andhra Pradesh also claims to be the birth place of Hanuman. There is a fourth contender in the coastal regions of Karnataka. So, where the birthplace of Hanuman remains largely unsolved.

Things get further complicated when it comes to locating the mythical Lanka. Many experts confidently claim that there are locations in Sri Lanka where airstrips for Ravana’s plane lay. They believe there are also caves built through chemical engineering. This allowed Ravana access to different parts of Kerala.

No scientist, however, accepts these claims, but they are very popular amongst tourists. The word Lanka simply means an island, even a river island. Today there are many settlements in Chhattisgarh and Odisha, which identify themselves as Sonpur or the golden city of Lanka.

There are also many river islands in India that identify themselves as Ravana’s Lanka. Those who have analysed the oldest versions of the Ramayana say that the manuscript describes a geography that doesn’t go beyond Godavari. It is a region where the Sal tree thrives.

This extends from the Godavari basin to Chhattisgarh and Odisha, but not not further south. Yet, in popular understanding, the Deccan region is associated with the monkey kingdom of Sugriva and Bali, and the Dhanushkodi coral reef, which links India to the island of Sri Lanka, is believed to be the bridge built for Ram by the vanar-sena or monkey-army.

As we all know, any challenge to Ram’s historicity leads to a violent backlash as it is a matter of faith. So it is best respected and left as is. But these multiple sites, which are greatly beneficial to the tourism industry, do pose a problem for Ramayana historians.